What were you drawing with your Crayons in kindergarten? Dogs, houses, and trees? That was then and this is now... kindergartners can compete to design, build and operate a launch payload and win up to $5,000 for their school or sponsoring nonprofit, and even dress a teddy bear to resemble an astronaut. 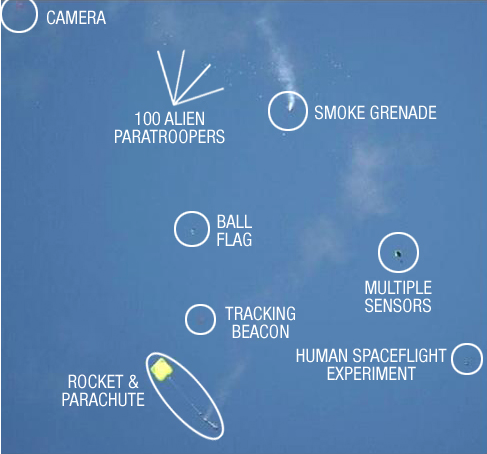 Here's a view of the 2009 payloads just after deployment from the rocket.

To celebrate the tenth anniversary the contest ULA has issued its request for proposals, courtesy of ULA and Ball Aerospace Student Rocket Launch, which is open to K-12 teams that can design, build and operate a payload to guide it to a designated ground-based target.

The 2018 Student Rocket Launch, tentatively scheduled for July 2018 in Colorado, is part of a program offering hands-on experience working with rockets and payloads to students from kindergarten through graduate school. ULA intern volunteers design, build and refurbish the high-power sport rocket — dubbed “Future Heavy” — while volunteer interns from Ball Aerospace and K-12 students design and build payloads that launch on the rocket.

Teams can download the request for proposal here. Interested teams should notify ULA of their interest as soon as possible; the deadline to submit is January 31, 2018.

Tory Bruno, ULA president and CEO said that the Student Rocket Launch gives students from kindergarten through graduate school hands-on experience with science, technology, engineering and math. Bruno continued that these students are the future of innovation and the industry. They will invent new types of jobs and environments, and they hope to inspire future rocket scientists, engineers and space entrepreneurs.

Payloads are objects, experiments or instruments launched on and deployed (if desired) from the rocket. A payload can be almost anything a team can create within the provided guidelines. Past payloads have included everything from a class teddy bear dressed as an astronaut to drones programmed to land at a predetermined location. There is no cost to the students or schools to fly payloads on the Future Heavy rocket, though they are responsible for the cost of materials, travel, etc. 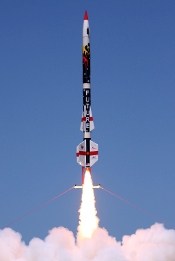 In order to mimic real launches where boosters land in the ocean and to add some complexity to the competition, the single stage Future Heavy is planned to be launched over a reservoir so teams will have to find creative solutions to successfully recover their payloads in spite of the water obstacle.

The payloads will launch on the ULA intern-built Future Heavy, a 41-foot-tall high-power sport rocket. It will fly to approximately 2,500 feet above the ground, where it will release up to 23 payloads. Ten payloads can compete for the cash prizes and will need to meet special competition requirements; the other payloads will be reserved for teams who want to fly payloads but not compete for the prize.

The Student Rocket Launch gives students and interns design, analysis, test and hands-on fabrication experience in order to encourage participants to pursue technical careers that will be the future of the nation’s presence and security in space.