[SatNews]  RUAG Space will supply meteorological instruments and structures for the second generation of Europe’s Metop weather satellites. At the Paris Air Show, representatives from prime contractor Airbus Defence and Space and RUAG Space signed contracts for these supplies with a total value of roughly 60 million Euro.

Metop satellites are the other pillar of Europe’s weather satellite network next to the Meteosats. Whereas Meteosats observe the weather on a large scale seeing one third of the Earth from their geostationary vantage point some 36,000 kilometers above the Earth, Metop satellites orbit our planet at a height of around just 800 kilometers. This allows them to study relatively small areas of the Earth’s atmosphere with a great deal of precision, and see the whole world every five days. Particularly in the medium to long term, the data they gather allows us to forecast the weather far more accurately than would be possible with geostationary satellites alone. 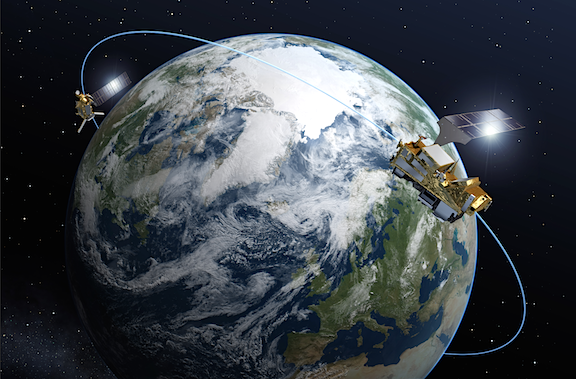 Similar to the self-supporting chassis of a car, the structures form the “backbone” of the satellites, onto and into which are mounted all the satellites’ other components. RUAG Space in Zurich will not only design and manufacture the satellite structures, but will also pre-integrate a range of other assemblies. These include, as an example, electrical harnesses and the system that controls the satellites’ interior temperature.