The satellite, dubbed “Vespucci” in honor of Amerigo Vespucci, the Italian explorer for whom the Americas were named, was transported in a custom container from the Lockheed Martin factory facility in Waterton, Colorado, to the Space Coast Regional Airport in Titusville, Florida, by a C-17 Globemaster III that originated from Joint Base Lewis-McChord, Washington.  The transportation crew consisted of contractor and government personnel who oversaw the entire operation to ensure that the conditions of the transport environment would not damage any of the satellite’s sensitive components. 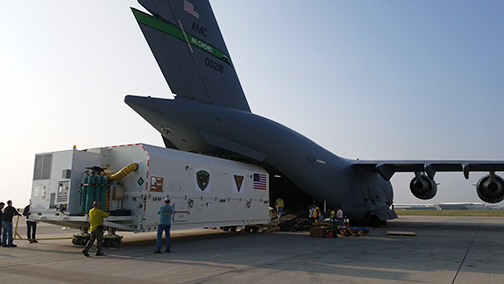 A government and contractor team loads the first GPS III satellite for transport aboard a U.S. Air Force C-17 Globemaster III from Joint Base Lewis-McChord, Washington, Aug. 20 at Buckley AFB, Colorado to begin processing for a December launch aboard a SpaceX Falcon 9 rocket at Cape Canaveral Air Force Station, Florida.

The delivery of Satellite Vehicle 01 (SV01) starts the clock for final testing and checkout of the space vehicle prior to launch. The satellite will be processed at the Astrotech Space Operations Florida facility. A government and contractor team will ensure the integrity of the satellite after shipment by performing a Mission Readiness Test to verify the health and safety of the vehicle, as well as communication compatibility with the ground operations center. The team will then prepare for propellant loading and encapsulate the satellite in its protective fairing. At the completion of these activities, the satellite will be headed for a first of its kind horizontal integration with the SpaceX Falcon 9 launch vehicle.

The modernized GPS III SV01 is slated to launch in December. It will augment the current constellation of 31 operational GPS satellites. GPS delivers the gold standard in positioning, navigation, and timing services supporting vital U.S. and allied operations worldwide, and underpins critical financial, transportation, and agricultural infrastructure that billions of users have come to depend on daily.

General John F. Thompson, SMC commander and Air Force program executive officer for Space, said that the shipment of the first GPS III satellite to the launch processing facility is a hallmark achievement for the program. The modernization of GPS has been an outstanding collaborative effort and this brings us another step closer to launch.”

Colonel Steven Whitney, Director of the GPS Directorate, added that while the launch of the last GPS IIF satellite marked the end of an era, the upcoming GPS III launch will be the start of a brand new one. This is the first of the Air Force's new GPS III satellites, the first to integrate with a SpaceX rocket, the first to interact with elements of GPS’ Next Generation Operational Control System (OCX) Block 0, and the first to have spacecraft acquisition and on orbit checkout from Lockheed Martin facilities.