[SatNews] The 200,000 mile long filament ripped through the sun's atmosphere, the corona, leaving behind what looks like a canyon of fire. 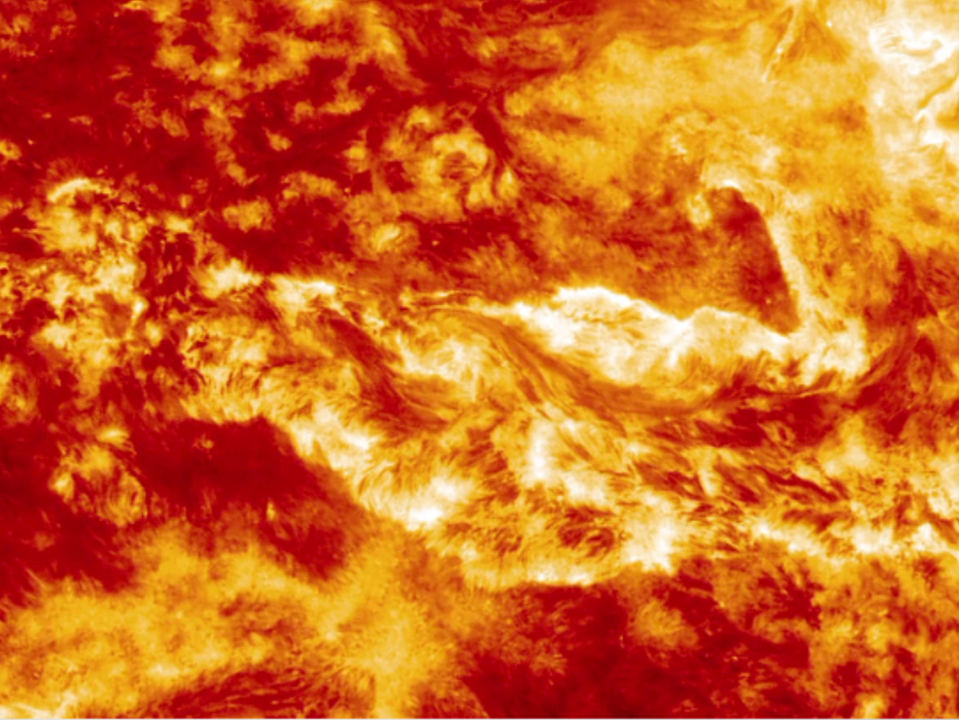 A magnetic filament of solar material erupted on the sun in late September, breaking the quiet conditions in a spectacular fashion. The 200,000 mile long filament ripped through the sun's atmosphere, the corona, leaving behind what looks like a canyon of fire. The glowing canyon traces the channel where magnetic fields held the filament aloft before the explosion.  Visualizers at NASA's Goddard Space Flight Center in Greenbelt, Maryland combined two days of satellite data to create a short movie of this gigantic event on the sun.

In reality, the sun is not made of fire, but of something called plasma: particles so hot that their electrons have boiled off, creating a charged gas that is interwoven with magnetic fields.

These images were captured on September 29-30, 2013, by NASA's Solar Dynamics Observatory, or SDO, which constantly observes the sun in a variety of wavelengths.

Different wavelengths help capture different aspect of events in the corona. The red images shown in the movie help highlight plasma at temperatures of 90,000 degrees F and are good for observing filaments as they form and erupt. The yellow images, showing temperatures at 1,000,000 degrees F, are useful for observing material coursing along the sun's magnetic field lines, seen in the movie as an arcade of loops across the area of the eruption. The browner images at the beginning of the movie show material at temperatures of 1,800,000 degrees F, and it is here where the canyon of fire imagery is most obvious.  By comparing this with the other colors, one sees that the two swirling ribbons moving farther away from each other are, in fact, the footprints of the giant magnetic field loops, which are growing and expanding as the filament pulls them upward.

The movie runs 2.3 minutes and is available for download in high resolution at: http://svs.gsfc.nasa.gov/goto?11379

The SatNews editor researched and included part of an article released by NASA on February 5, 2010 that explains the mission. The entire piece can be viewed here.

"Understanding solar variability is crucial," says space scientist Judith Lean of the Naval Research Lab in Washington DC. "Our modern way of life depends upon it."

Enter the Solar Dynamics Observatory—"SDO" for short—slated to launch on Feb. 9, 2010, from the Kennedy Space Center in Florida.

SDO is designed to probe solar variability unlike any other mission in NASA history. It will observe the sun faster, deeper, and in greater detail than previous observatories, breaking barriers of time-scale and clarity that have long blocked progress in solar physics. 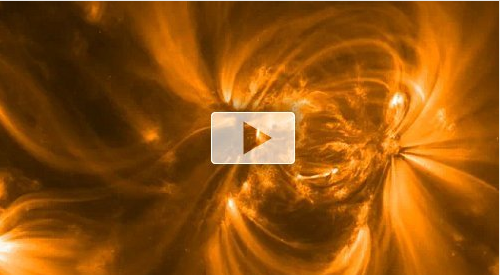 Above: These sunspot magnetic fields are about to erupt. SDO will take pictures like this, only much better, with 10-times HD resolution, big and crisp enough to fill the screen of an IMAX theatre. [movie]

Guhathakurta believes that "SDO is going to revolutionize our view of the sun."

The revolution begins with high-speed photography. SDO will record IMAX-quality images of the sun every 10 seconds using a bank of multi-wavelength telescopes called the Atmospheric Imaging Assembly (AIA). For comparison, previous observatories have taken pictures at best every few minutes with resolutions akin to what you see on the web, not at a movie theatre. Researchers believe that SDO's rapid-fire cadence could have the same transformative effect on solar physics that the invention of high-speed photography had on many sciences in the 19th century.

SDO doesn't stop at the stellar surface. SDO's Helioseismic Magnetic Imager (HMI) can actually look inside the sun at the solar dynamo itself.

The solar dynamo is a network of deep plasma currents that generates the sun's tangled and sometimes explosive magnetic field. It regulates all forms of solar activity from the lightning-fast eruptions of solar flares to the slow decadal undulations of the sunspot cycle.