[SatNews] According to NSR’s Government and Military Satellite Communications, 7th Edition report just released, the industry will continue revenue gains until 2019 despite the imminent troop drawdown and complete withdrawal of allied troops in Iraq and Afghanistan. 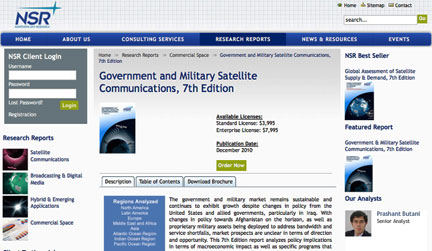 NSR report infolink
Policy changes in these hotspots are beginning to affect demand trends and market potential, which has grown robustly since 2002. There appears to be a turning point in market dynamics where sustainability and growth levels may have reached their peak. Moreover, internal military proprietary capacity has been deployed, and more is on the way to address bandwidth and service shortfalls. However, the NSR report finds that commercial bandwidth, commercial services, and commercial partnerships are permanent features of military/government procurement and usage over the long term. This has been pronounced repeatedly by various military entities, in particular the U.S. Department of Defense, which is by far the largest user of commercial bandwidth and services in the government sector.

In sum, NSR projects government and military satellite communications equipment and services to grow from an estimated $3.2 billion in revenues in 2009 to $9.2 billion by 2019, yielding total revenues of $66.8 billion over an 11-year period. Satellite services provided by systems integrators and service providers should dominate revenue streams, accounting for 89 percent of cumulative revenues. Equipment sales will likewise experience healthy growth as a mix of solutions including VSATs, COTP, COTM and narrowband mobile solutions continue to impact the marketplace.

Declining troop presence does adversely impact certain segments of demand, but these are replaced by other segments that drive growth. In fact, bandwidth requirements for missions specifically for intelligence gathering, surveillance and reconnaissance (ISR) are far greater than supporting troops on the ground. Unmanned aerial vehicles (UAVs) in particular are expected to drive usage as ISR missions will increase as troops are withdrawn. Although bandwidth-per-soldier requirements have increased over time, bandwidth-per-UAV is far greater currently and is expected to increase exponentially over time. The report also finds that creative solutions, both in terms of technological offerings and partnerships between governments and the commercial industry, will lead to unique opportunities. Past procurement practices of buying traditional C- and Ku-band transponders on the spot market are likely to decline, while arrangements via hosted payloads, deployment of military frequencies on commercial satellites and leveraging the advantages of High Throughput Satellites (HTS) are some of the arrangements that will likely increase within the next five years.