The Seychelles and the United States of America have stated their firm commitment to the coordinated effort in the combat against piracy in the western Indian Ocean. 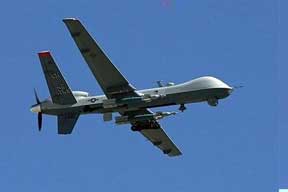 This follows the arrival of several U.S. military MQ-9 Unmanned Aerial Vehicles(UAV) aircraft in Seychelles, that will be used for joint anti-piracy surveillance program, at the request of the Government of Seychelles. This landmark cooperation follows the signing of a Status of Forces Agreement (SOFA) in July 2009 with the USA.
An MQ-9 unmanned aerial vehicle (UAV). The Seychelles and the US Africa Command on Friday demonstrated drones to be used to detect Somali pirate boats that have wreaked havoc in maritime activities and traffic in the western Indian Ocean. Photo:Ethan Miller/AFP

The U.S. military invited journalists and members of the High Level Committee on Piracy to view the planes this morning.

The Head of the High Level Committee on Piracy, Minister Joel Morgan has said that with the UAV’s capabilities, there is yet another clear message being sent out to the pirates: that no criminal activities will go undetected.

“This UAV program specifically, will be able to help monitor large areas and detect the presence of pirates who operate in small boats which are often difficult to spot. This surveillance activity will complement and reinforce the other military assistance we are already receiving. This cooperation is a concrete example of the commitment of the U.S. to improve maritime safety and security in the Western Indian Ocean. This assistance to the people of Seychelles is very well appreciated,” said Minister Morgan.

A statement was also made on behalf of the U.S. Embassy in Mauritius, by the Public Affairs Officer Mr. Craig White.

From the Database of Press Releases Related to Africa.