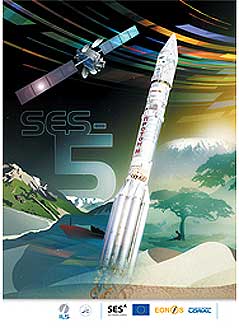 [SatNews] The next upcoming launch will be...

The first three stages of the Proton will use a standard ascent profile to place the orbital unit (Breeze M upper stage and the SES-5 satellite) into a sub-orbital trajectory. From this point in the mission, the Breeze M will perform planned mission maneuvers to advance the orbital unit first to a circular parking orbit, then to an intermediate orbit, followed by a transfer orbit, and finally to a geostationary transfer orbit. Separation of the SES-5 satellite is scheduled to occur approximately 9 hours, 12 minutes after lift-off. The logistics involve: Proton M/Breeze M which weighs in at 705,000 kg (1,554,000 lbs), including payload 58.2 m (191 ft).

The payload is an SES-5 communications satellite from SES of Luxembourg. Space Systems/Loral of Palo Alto, California is the satellite's manufacturer. SES’ high-powered Ku-band beams will bring incremental capacity over Africa, and the Nordic and Baltic countries to support DTH services. Its comprehensive C-band beams cover Africa, the Middle East and Europe to enable services such as GSM backhaul, VSAT applications, maritime communications and video distribution. SES-5 will also carry the first hosted L-band payload for the European Commission’s European Geostationary Navigation Overlay Service (EGNOS). The anticipated service life span of this satellite is 15 years.

A live webcast will begin approximately 23 minutes before liftoff. Webcast can be seen at: General mission information and launch status updates are available at the website, and you can follow the action on Twitter and “like” us on Facebook for mission updates.