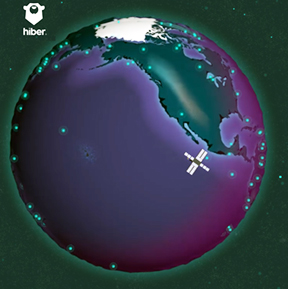 Backed by the European Space Agency (ESA) and the Netherlands Space Office via the ARTES program, Hiber's new HiberDrive offering brings capabilities to cubesats that were previously accessible only to large satellites.

HiberDrive is a brand new Attitude and Orbit Control System (AOCS) miniaturized to 1U for the global cubesat market. Hyperion’s Attitude Determination and Control System has been combined with Dawn Aerospace’s high performance green bi-propellant propulsion module which is linked with Hiber’s automated constellation management software.

Space debris is already a serious issue, as there are more than 250,000 pieces under 2 cm. currently untracked in LEO — the risk of the Kessler syndrome is quite real (see: http://www.spacesafetymagazine.com/space-debris/kessler-syndrome/). By using high performance green bi-propellant propulsion, Hiber now have complete control of their satellite’s end-of-life, de-orbiting and burning up cubesats in Earth’s atmosphere when they choose.

By deciding upon a 3U form factor satellites, Hiber’s launch costs have halved. These savings allow Hiber to create a larger, faster, cheaper IoT network — passing benefits and savings back to customers.
The HiberDrive was developed in partnership with Hyperion Technologies and Dawn Aerospace for Hiber’s next generation low power 3U small satellite IoT constellation.

According to the company, the Hiber constellation will come online much faster and with much more capabilities than any other smallsat constellation. The use of high performance green bi-propellant propulsion and miniaturized components has been key.

Although developed for Hiber’s low power IoT SmallSat constellation, HiberDrive is being opened up for use in other smallsat constellations. A demo unit will be on display at the 33rd AIAA/USU SmallSat Conference 2019, August 4th to 8th in Utah.

Maarten Engelen, Hiber CTO, noted that the total size of the integrated AOCS has been brought down to 1U, which is revolutionary to the cubesat market. There are alternatives out there, but nothing that suits a 3U CubeSat like this — the company was lucky to have found good partners with Hyperion Technologies and Dawn Aerospace, who managed to bring down the total size of the integrated ADCS / Propulsion module to 1U.

Bert Monna, Hyperion CEO, stated that the believe the payload should dominate a satellite, and is Hyperion's business focus. Miniaturized components that deliver high performance, such as miniaturized reaction wheels, sun sensors and magnetorquers, give capabilities to smallsats that the market has never seen before. Similarly, Dawn’s green bi-propellant propulsion system offers thrust ~1,000x higher than electric propulsion based systems for cubesats.