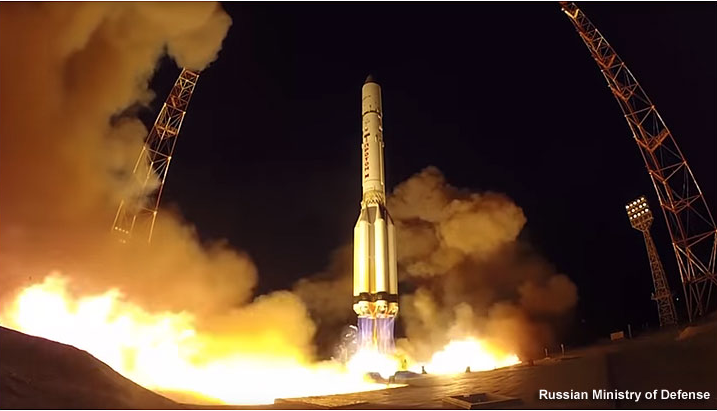 The second Proton mission of 2017 successfully delivered the first Blagovest communications satellite, according to the Russian Ministry of Defense. Blagovest is a Russian religious term meaning "good news." Due to the military nature of the payload, only limited information was released on the mission and no live coverage of the liftoff on August 17 was provided. According to the rocket manufacturer, it was the 100th launch of the Proton-M variant and the 414th mission since the introduction of the Proton family in 1965.

A series of Blagovest communications satellites has been developed and manufactured at ISS Reshetnev in Zheleznogorsk, Russia, for the Russian Ministry of Defense.

The Blagovest satellite is equipped with a new-generation communications payload developed by ISS Reshetnev in cooperation with the European consortium Thales Alenia Space. Operating in Ka- and C-band, the transponders were designed to enable a broad-band Internet access, data transmission, broadcasting of TV and radio-programs, video-conferencing and telephone communications. Though the satellite is to be owned and operated by the Russian military, it was designed to transmit via open communications channels, according to ISS Reshetnev.

The satellite is based on the ISS Reshetnev's Ekspress-2000 platform, the company's largest standard spacecraft bus. The comparisons of Ekspress-2000 to available visuals of the Blagovest reveal a large expansion of the payload module and enlarged radiators.

The Blagovest project is the brainchild of Anatoly Serduykov during his tenure as the Russian Minister of Defense from 2007 to 2012. During that period, planners at the Ministry of Defense apparently proposed to create a military controlled commercial competitor to Russia's state owned civilian satellite communications agency, GPKS, which operates the Ekspress orbital constellation. The new military-controlled satellite operator called Voentelekom was conceived to provide a wide range of communications, including multimedia and video-conferencing to military and commercial customers. The plan called for the procurement of European-built ground infrastructure for high-volume communications operating at frequencies of 20-44 gigahertz and known as Ka/Q-band.

However according to posters on the online forum of the Novosti Kosmonavtiki magazine, compact and mobile ground stations operating in Ka-band to support the Blagovest project were not expected to come online until seven or even 10 years after the first launch in 2017, apparently prompting developers to partially re-purpose the project for communications in C-band providing such services as non-secure basic communications to Russian military bases across the country. Observers noted, that available photos of the satellite apparently showed only fixed antennas, which could not be re-pointed to beam signals to different regions on Earth.

One estimate counted as many as 36 Ka-band transmitters on the Blagovest. Some observers were puzzled by the apparent excessive capacity of the network for the assumed needs of the Ministry of Defense, another hint of a dual military and civilian application of the system.

Although Serdyukov lost his job as the Minister of Defense long before the first Blagovest had a chance to reach the launch pad, the project continued under the new head of the Russian military Sergei Shoygu, who was especially fond of novel medium of long-range video-conferences, observers noted.

Probably due to its limited military role, the Blagovest project was partially declassified around 2015, with many images of the satellite and some other data on the system publicly released long before its launch.

At the beginning of August 2017, the Head of ISS Reshetnev Nikolai Testoedov told Russian media that the Ministry of Defense had ordered four Blagovest satellites, with the first spacecraft scheduled to launch on August 17 and another toward the end of 2017. Another pair of Blagovest satellites was to fly in 2018, Testoedov said at the time.