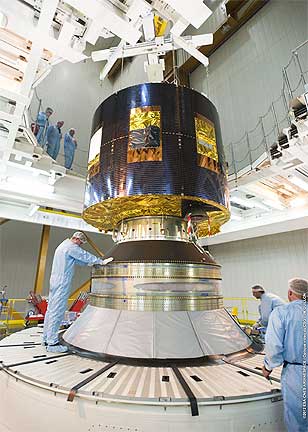 ...Europe’s MSG-3 meteorological satellite now installed on its workhorse Ariane 5 launcher at the Spaceport in French Guiana. This spacecraft was positioned atop Ariane 5’s core cryogenic stage yesterday during activity inside the Spaceport’s launch vehicle Final Assembly Building—placing it as the lower passenger in the dual-payload “stack,” to be released second in the flight sequence after its co-passenger, EchoStar XVII.

MSG-3 will be operated by EUMETSAT (the European Organisation for the Exploitation of Meteorological Satellites). After its deployment by Ariane 5, the satellite is to provide highly detailed imagery of Europe, the North Atlantic and Africa for use by meteorologists and national weather forecasters. MSG-3 has a liftoff mass of approximately 2,000 kg., and will operate in geostationary orbit. Produced by a Thales Alenia Space-led European consortium, MSG-3 will be the no. 3 spacecraft in Europe’s second-generation MSG series—following the two previously lofted by Arianespace: MSG-1 in August 2002 (which was re-designated Meteosat-8 when it became operational); and MSG-2 in December 2005 (renamed Meteosat-9 upon reaching operational service).

The launch of MSG-3 and EchoStar XVII will be Arianespace’s third heavy-lift flight with Ariane 5 in 2012. It follows the May 15 launch of two telecommunications satellites for Asia: JCSAT-13 and VINASAT-2; and the March 23 liftoff with Europe’s third Automated Transfer Vehicle for servicing of the International Space Station.