Fungus Among Us — Space Swabbing

Astronauts working outside the International Space Station on March 19th used an innovative laboratory device to detect how biological material may be spread in space. 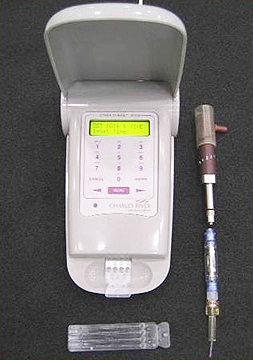 The experiment is a critical step in developing procedures to monitor and mitigate biological contamination in future missions to other worlds. The successful spacewalk was the first-ever such use of the Lab-on-a-Chip Portable Test System, or LOCAD-PTS. The portable testing and analysis device, used on the space station since March 2007, is designed to rapidly detect and identify a variety of biological materials derived from various bacteria and fungi. Before STS-119 mission specialists Steve Swanson and Richard Arnold exited the space station airlock to install new solar arrays that will help power the orbiting facility, astronaut Sandy Magnus swabbed their spacesuit gloves. The procedure was repeated when the astronauts returned to the space station. The crew is analyzing the results using LOCAD-PTS, and will provide results next week, after Discovery undocks from the station to prepare for its journey home.

As the spacewalkers worked, they came into contact with surfaces of the solar array truss segment, which were sampled and analyzed with LOCAD-PTS prior to their launch to space March 15 on space shuttle Discovery. While most surfaces of the hardware were clean before launch, slightly elevated levels of fungi were detected, particularly in the fabric gap spanners — safety elements that literally span the gap between handrails, helping the crew move around the exterior of the space station as they work. The suit gloves of Swanson and Arnold functioned as "swab" devices, picking up any bacteria or fungi, dead or alive, that remained on the gap spanners or other surfaces. Studying those samples will permit the LOCAD-PTS Exploration team to track biological materials before and after their journey from Earth to space.

The compact LOCAD-PTS device, which incorporates interchangeable cartridges, is designed to serve as a mobile laboratory requiring minimal resources. The handheld unit weighs just 2 pounds. It is driven by technology developed by Charles River Laboratories of Wilmington, Massachusetts, and modified for space flight by NASA researchers at the Marshall Center. The LOCAD-PTS Exploration experiment is funded by the NASA Science Mission Directorate's Moon and Mars Analog Mission Activities Program at NASA Headquarters in Washington.