Forrester Reports: $500 Million in Funding Being Sought by SpaceX

Chris Forrester at the Advanced Television infosite has authored a piece that finds SpaceX saying the company is looking to raise an additional $500 million in funding.

According to a regulatory filing, Elon Musk’s Space Exploration Technologies is the vehicle, and the target for the cash is the company’s ‘Starlink’ internet by satellite project.

Musk raised a similar sum a few months ago, and the fresh cash-raising suggests that investment in the project is being ramped up, perhaps because of a threat by billionaire Amazon-owner Jeff Bezos, who us addressing a very similar project. 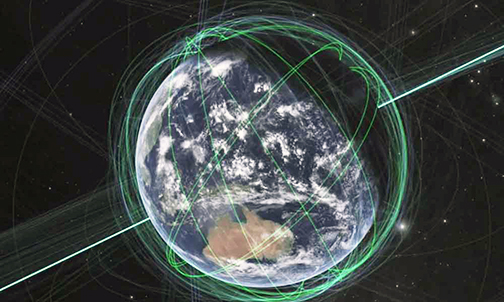 The first batch of Starlink craft will launch next month, but the initial aim is to have 2,200 satellites on  orbit in the next five years. SpaceX launched two demonstration satellites a year ago (Tintin 1 and 2).

Musk’s company president Gwynn Shotwell, interviewed by the Wall Street Journal, said: “I’m pretty sure we can launch satellites into orbit,” Shotwell said. One question SpaceX is still asking itself, she said: “Can you make money out of it?”

Musk’s plan has been on the cards since 2015, and in 2017 he filed applications for a mega-constellation of 4,425 new Low Earth orbiting satellites, building to an overall total of a spectacular 12,000 satellites in various Low Earth orbits, the lowest being just 550 km. (340 miles) up.

When you consider that the sum total of satellites mankind has put into orbit is no more than 1,460 or so in operation (plus another 2,600 that are inactive), Musk wants to totally exceed the current fleets of orbiting craft, and as quickly as possible.

That needs cash, an estimated $10 billion or so.

However, Jeff Bezos is also on the case, and Bezos is talking of having his fleet enter service by 2024. There’s also Greg Wyler’s OneWeb system, and plenty of other rivals all keen to win a slice of global demand for extra bandwidth.