Northrop Grumman + NASA...An Ultralight that is a Good Reflection on SMAP Mission


[SatNews] "The reflector is based on AstroMesh® technology, which is lighter, stiffer and inherently more accurate than competing technologies." 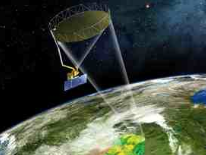 An artist's rendition of the SMAP spacecraft in orbit. The AstroMesh(R) reflector is shown in the deployed position and the approximate conical beam and footprint is shown graphically.

The SMAP mission will provide global measurements of soil moisture and indicate whether it is frozen or thawed. The data will be used to understand the processes that link Earth's water, energy and carbon cycles and improve weather and climate prediction models. SMAP's freeze and thaw data will be used to detect changes in growing season length to help scientists better understand how much carbon plants absorb from the atmosphere each year. SMAP data will also be used to improve flood prediction and drought monitoring capabilities.

As the satellite orbits Earth, the mesh reflector, which deploys and expands to a 19-foot aperture, will provide a conically scanning antenna beam of approximately 40 degrees or a swath of 621 miles for total global mapping every 2-3 days.

In spite of the complexities of the mission, the SMAP reflector weighs only 56 pounds. The extremely stiff boom, which deploys the reflector into position and reduces deflections caused by the spin rate, weighs 55 pounds. With the remaining launch restraint equipment weighing approximately 14 pounds, the entire system totals a mere 125 pounds.

"Ultralightweight technology is critical to meet the demanding requirements of this mission," said Geoff Marks, chief technologist at Astro Aerospace, a strategic business unit of Northrop Grumman, which developed the assembly. "The reflector is based on AstroMesh® technology, which is lighter, stiffer and inherently more accurate than competing technologies. These characteristics and innate surface accuracy makes it an ideal choice for high frequency communication and radar applications."

The SMAP observatory is scheduled to be launched in January 2015 into a 426-mile near-polar, sun-synchronous orbit, with equator crossings at 6 a.m. and 6 p.m. It will provide data over a three-year period.

Since 1958, Astro Aerospace has helped enable complex missions to Earth orbit, Mars and beyond with its innovative deployable space structures and mechanisms. The business unit's products have been successfully deployed on more than 150 space flights with a 100 percent success rate, a testament to Northrop Grumman's commitment to reliability, quality and affordability.