Back on January 12, 2018, Planetary Resources launched the Arkyd-6, a 6U cubesat, a demo platform for technology intended to detect water resources in space — the launch on the Indian PSLV C40 was spectacular and within hours after the spacecraft reached polar Earth orbit, the team began to regularly receive healthy telemetry from the spacecraft.

The spacecraft was designed, manufactured, tested and integrated almost entirely in house. The firm's Redmond, Washington, facilities provided the team the opportunity to prototype and develop all of the hardware under one roof. In the weeks following launch, the team managed the mission, even though the spacecraft was fully autonomous and able to execute all functions independently. At every critical check point, Arkyd-6 communicated with the team. 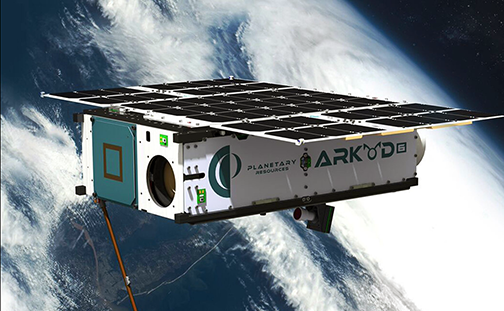 Artistic rendition of the Arkyd-6 smallsat on orbit.
Image is courtesy of Planetary Resources.

The company is now reporting that the Arkyd-6 has satisfied all of mission requirements. The spacecraft successfully demonstrated the distributed computing system, communications, attitude control system, power generation and storage with deployable solar arrays and batteries, star tracker and reaction wheels as well as the first, commercial, mid-wave infrared (MWIR) imager operated in space.

The firm's MWIR instrument is a broadband imager that spans 3 to 5 microns within the infrared region of the electromagnetic spectrum. This region is sensitive to the presence of water — including that in hydrated minerals — and thermal energy, allowing the smallsat to see elements that are not visible to any other private satellite in space. During the mission, the imager was used as a tool to search for the presence of water and other economic signatures on Earth; however, the company's focus is to find the presence of water beyond Earth.

Arkyd-6 MWIR capture of the refinery in Algeria.
Image is courtesy of Planetary Resources.

An example of the MWIR imager’s capability is the image to the left that was taken by the Arkyd-6 of a refinery in Algeria. The imager was able to capture hot spots or thermal signatures of the refinery flame towers, where all other commercial images of this same area would be of a nondescript desert landscape.

The Arkyd-6 is a part of Planetary Resources’ research and development work to create an instrument capable of detecting water on near-Earth asteroids. The data obtained from this mission, along with the experience gained from building and operating the Arkyd-6 will assist in the development of the Arkyd-301, the company's next spacecraft platform.