Data Device Corporation (DDC) has announced their SCS750 Single Board Computers for Space will be deployed on the ESA Euclid satellite, which is scheduled for launch in 2021. 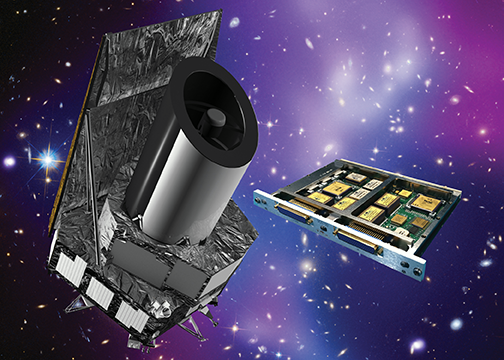 DDC SCS750 space computers will be used on both the Euclid’s instruments NISP and VIS. The VIS instrument provides high-quality images in the visible spectrum, to derive Dark Matter content and properties by studying the tiny deformation of galaxy shapes due to weak gravitational lensing. The focal plane array is made of 36 large area, back-illuminated, red-enhanced CCD detectors. The SCS750 will be incorporated into the Control and Data Processing Unit (CDPU), which controls the instrument, transitioning between the different instrument modes and sequencing the operations within each exposure. It also takes the science data from the CCDs Read Out Electronics (ROEs). The processor computing power allows the execution at software level of the real time lossless compression of the 36 CCDs data, including their buffering and packetization. An overall daily production of ~120 GB is expected, which must be compressed to fit the 520 Gbit VIS daily telemetry.

The NISP spectroscopic data will primarily be used to describe the distribution and clustering of galaxies and how they changed over the last 10 billion years under the effects of the dark matter and dark energy content of the Universe. The NISP focal plane is composed of a matrix of 16 2k×2k Teledyne H2RG detectors. The photometric channel will be equipped with 3 broad band filters (Y, J and H) while the spectroscopic channel will be equipped with 4 low resolution near infrared grisms to implement slitless spectroscopy observations.

Each detector is controlled by a SIDECAR ASIC that performs a non-destructive multiple readout, providing a sequence of 4M pixels frames with a period of about 1.3s to the data processing units called DCU/DPU (Data Processing Unit/ Detector Control Unit). The data of the multiple non-destructive reads are pre-processed in HW implementing a MACC(G,R,D) read out scheme: for each exposure, G groups are obtained accumulating  the pixel values of R consecutive frames acquired discarding D frames between groups. The group’s data are then processed by the SCS750 with a least mean square fit and compressed with lossless CCSDS121.0 compression algorithm, together with other ancillary data in order to be sent to ground for scientific analysis.

Euclid employs several of DDC’s SCS750 single board computers onboard, serving as key elements within the spacecraft’s critical imaging and data acquisition systems. DDC’s single board computers use reliable silicon-on-insulator Power PC processors and radiation hardened parts, including DDC’s RAD-PAK® memories, in conjunction with triple redundant processing algorithms that provide comprehensive error detection and correction. These features enable DDC’s single board computers to achieve the best SEE performance (less than one error in 80 years) to yield high performance low-risk (TRL-9) computing solutions for the most demanding space applications. Since DDC began providing its radiation hardened RAD-PAK components and single board computer solutions more than 20 years ago, the company has experienced zero failures in space.

Brian Eichler, DDC’s Microelectronics International Regional Sales Manager, said that DDC is proud to have been selected by OHB to support the advanced functionality, dependability and long life cycle requirements of the ESA Euclid program. The company's space level design and manufacturing qualifications, along with the firm's proven reliability as a qualified supplier to NASA, ESA, JAXA and thousands of missions, for more than 20 years without any flight failures enables DDC to provide OHB with the highest levels of quality, performance and support.