The Trace Gas Orbiter (TGO) of ESA's ExoMars 2016 has successfully performed the long, 139-minute burn required for Mars capture and has entered an elliptical orbit around the Red Plane; however, contact has not yet been confirmed with the mission's test lander from the surface of the planet. 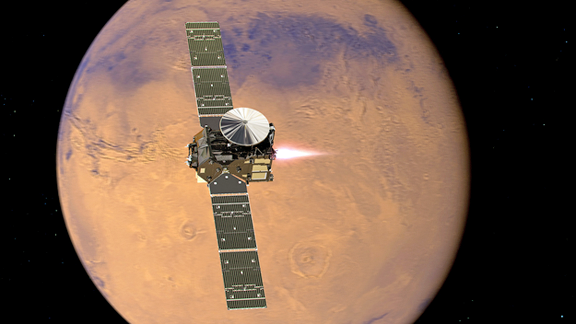 TGO's Mars orbit Insertion burn lasted from 13:05 to 15:24 UTC on October 19th, reducing the spacecraft's speed and direction by more than 1.5 km/s. The TGO is now on the planned orbit around Mars. European Space Agency teams at the European Space Operations Centre (ESOC) in Darmstadt, Germany, continue to monitor the good health of their second orbiter around Mars, which joins the 13-year old Mars Express.

The ESOC teams are trying to confirm contact with the Entry, Descent & Landing Demonstrator Module (EDM), Schiaparelli, which entered the Martian atmosphere some 107 minutes after the TGO's maneuver for orbit insertion. The 577 kg EDM was released by the TGO at 14:42 UTC on October 16th. Schiaparelli was programmed to autonomously perform an automated landing sequence, with parachute deployment and front heat shield release between 11 and 7 km, followed by a retrorocket braking starting at 1100 meters from the ground and a final fall from a height of 2 meters protected by a crushable structure.

Prior to atmospheric entry at 14:42 UTC, contact via the Giant Metrewave Radio Telescope (GMRT), the world's largest interferometric array, located near Pune, India, was established just after a beacon signal 75 minutes before reaching the upper layers of the Martian atmosphere started transmitting. However, the signal was lost some time prior to the landing.

A series of windows have been programmed to listen for signals coming from the lander via ESA'S Mars Express and NASA's Mars Reconnaissance Orbiter (MRO) and Mars Atmosphere & Volatile Evolution (MAVEN) probes. The Giant Metrewave Radio Telescope (GMRT) also has listening slots. If Schiaparelli reached the surface safely, the lander's batteries should be able to support operations for three to ten days, offering multiple opportunities to re-establish a communication link.

TGO is equipped with a suite of science instruments in order to study the Martian environment from orbit. Although mostly a technology demonstrator, Schiaparelli is also carrying a small science payload to perform some observations from ground.

ExoMars 2016 is the first part of a two-fold international endeavor conducted by ESA in cooperation with Roskosmos in Russia that will also encompass the ExoMars 2020 mission. Due in 2020, the second ExoMars mission will include a Russian lander and a European rover, which will drill down to 2 m underground to look for pristine organic material.