Satellite Imagery to be Used to Track India's Mangrove Forests 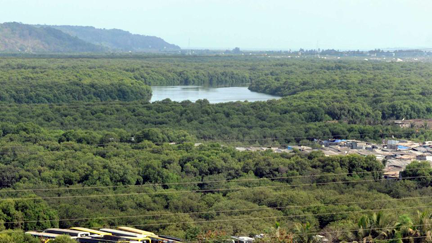 The health of mangroves in Maharashtra, India, will now be monitored using real-time satellite images.

The state mangrove cell has approved a proposal from the Indian Institute of Space Science and Technology in Valiamala, Thiruvananthapuram, Kerala, and commissioned the research project to them to track the health of mangrove forests using real-time satellite remote sensing data. Satellite images will be relayed to the forest department on a monthly basis in the form of reports to check area-wise increase, destruction cases and areas where restoration can be done.

Maps indicating the health of mangrove forests will be developed, which will include mangrove density, fragmentation, diversity, vegetation indices, erosion or accretion status, drainage density, sedimentation and blockages along river or estuary courses. This is the first time any state in India has allocated its resources to survey mangrove cover along its coastline, said mangrove cell officials. The proposal was received earlier this year and after several meetings to discuss the requirements from either side, it was cleared and the research project was awarded to the organization.

HT had reported in January this year that the mangrove cell had tied up with the Indian Space Research Organisation (ISRO) to track real-time mangrove destruction in the state through an open source software — digital tracking through satellite maps – developed by Maharashtra Remote Sensing Application Centre (MRSAC).

The Indian Institute of Space Science and Technology will be developing a spatial database with baseline maps with mangroves within a buffer zone of 10km from the coast of five coastal districts of Maharashtra (Mumbai, Mumbai suburban, Raigad, Ratnagiri and Sindhudurg) with a scale of 1:6,000. Additionally, canopy density, species distribution, hydrological network (surface water bodies such as estuaries, ponds, lakes, lagoons, rivers, streams etc.), and coastal geomorphology (tidal flats, mudflats, sand beaches, marsh land etc.), will all be identified through remote sensing data now.

According to N. Vasudevan, additional principal chief conservator of forest, state mangrove cell, many of the mangrove patches in the state, especially denser areas are inaccessible by foot or boats. The edge of the creek can be seen, but owing to degradation and siltation, it is difficult to enter these areas. An eye in the sky or more advanced technology is needed to monitor the mangrove cover. This will help us to deploy manpower and resources from space organisations and mangrove cell to be properly deployed.

Vasudevan added that the organization will now have more reliable data and periodic alerts available to regarding vacant areas for plantation and problems with the health of the mangrove ecosystem. This study is underway at ISRO and the expectation is to receive the first set of results by this year's end.

Article and image are courtesy of the Hindustan Times, reported by Badri Chatterjee.