When ESA’s planned Hera mission journeys to its target binary asteroid system, it will not be alone.

The spacecraft will carry two tiny cubesats for deployment around — and eventual landing on — the Didymos asteroids. Each companion spacecraft will be small enough to fit inside a briefcase, as compared to the desk-sized Hera. 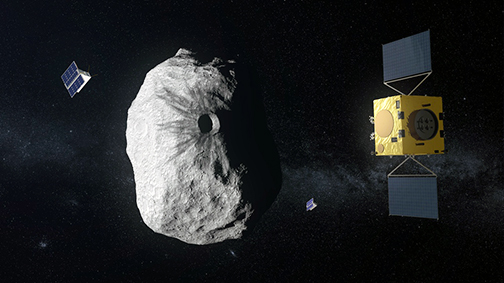 ESA’s Hera mission artistic concept, currently under study, would be humanity’s first mission to a binary asteroid: the 800 m-diameter Didymos is accompanied by a 170 m-diameter secondary body. Hera will study the aftermath of the impact caused by the NASA spacecraft DART on the smaller body.

Image is courtesy of the ESA Science Office.

Hera has room to deliver two ‘six-unit’ smallsat missions to the Didymos asteroid system — a 780 meter-diameter, mountain-sized main body that is orbited by a 160 meter moon, informally called ‘Didymoon,’ about the same size as the Great Pyramid of Giza. The Hera mission received proposals for cubesats from across Europe and an evaluation board has now made the final selection.

The first cubesat companion is called the Asteroid Prospection Explorer (APEX), and was developed by a Swedish/Finnish/Czech/German consortium. It will perform detailed spectral measurements of both asteroids’ surfaces — measuring the sunlight reflected by Didymos and breaking down its various colors to discover how these asteroids have interacted with the space environment, pinpointing any differences in composition between the two. In addition, APEX will make magnetic readings that will give insight into their interior structure of these bodies. Guided by a navigation camera and a ‘laser radar’ (lidar) instrument, APEX will also make a landing on one of the asteroids, gathering valuable data in the process using inertial sensors, and going on to perform close-up observations of the asteroid’s surface material.

The other cubesat is called Juventas, developed by Danish company GomSpace and GMV in Romania, and will measure the gravity field as well as the internal structure of the smaller of the two Didymos asteroids. In close orbit around Didymoon, Juventas will line up with Hera to perform satellite-to-satellite radio-science experiments and carry out a low-frequency radar survey of the asteroid interior, similar to performing a detailed ‘X-ray scan’ of Didymoon to unveil its interior. The adventure will end with a landing, using the dynamics of any likely bouncing to capture details of the asteroid’s surface material — followed by several days of surface operations. 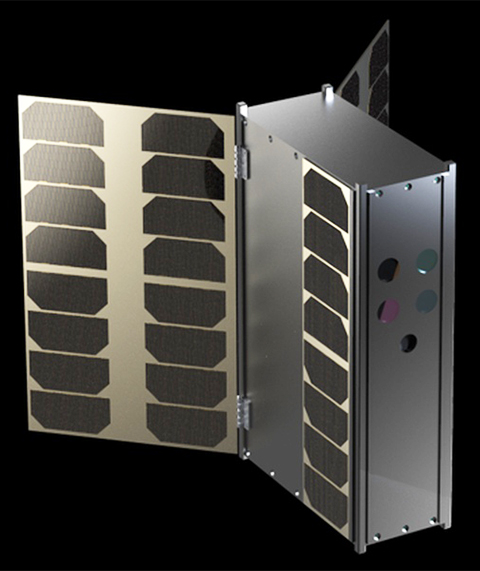 The Asteroid Prospection Explorer (or ‘APEX’) cubesat to accompany the Hera mission to the Didymos binary asteroid system.

Photo is courtesy of the Swedish Institute of Space Physics. 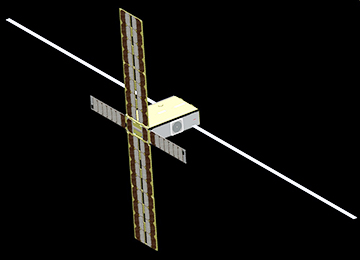 Artistic rendition of Juventas, the 6U xubesat developed as a 'daughter' to the Hera mothership.

Image is courtesy of GomSpace.

Hera is set to be humankind’s first mission to a binary asteroid system. As well as testing technologies in deep space and gathering crucial science data, Hera is designed to be Europe’s contribution to an international planetary defense effort: it would survey the crater and measure orbital deviation of Didymoon caused by the earlier collision of a NASA probe, called DART. This unique experiment will validate the asteroid deflection technique referred to as kinetic impactor, enabling humankind to protect our planet from asteroid impacts.

Next, the two cubesats will have their designs refined and interfaces with their mothership finalized, in line with continuing design work on the Hera mission itself, which will be presented to ESA’s Space19+ meeting towards the end of this year, where Europe’s space ministers will take a final decision on flying the mission.

Hera manager Ian Carnelli  explained that the company is very happy to have these high-quality cubesat missions join with the firm to perform additional bonus science alongside their Hera mothership. Carrying added instruments and venturing much closer to the target bodies, they will give different perspectives and complementary investigations on this exotic binary asteroid. They will also give the company valuable experience of close proximity operations relayed by the Hera mothercraft in extreme low-gravity conditions. This will be very valuable to many future missions.

Paolo Martino, Hera spacecraft lead engineer, added that the idea of building cubesats for deep space is relatively new, but was recently validated by NASA’s InSight landing on Mars last November, when a pair of accompanying cubesats succeeded in relaying the lander’s radio signals back to Earth — as well as returning imagery of the Red Planet.