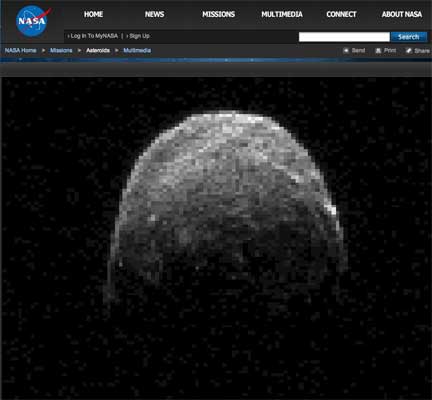 [SatNews] It's not every day do you get to observe a fly-by asteroid.

The asteroid safely will fly past our planet slightly closer than the moon's orbit on November 8. The last time a space rock this large came as close to Earth was in 1976, although astronomers did not know about the flyby at the time. The next known approach of an asteroid this size will be in 2028.

The image was taken on November 7 at 11:45 a.m. PST, when the asteroid was approximately 860,000 miles (1.38 million kilometers) away from Earth. Tracking of the aircraft carrier-sized asteroid began at Goldstone at 9:30 a.m. PDT on November 4 with the 230-foot-wide (70-meter) antenna and lasted about two hours, with an additional four hours of tracking planned each day from November 6 - 10.

Radar observations from the Arecibo Planetary Radar Facility in Puerto Rico will begin November 8, the same day the asteroid will make its closest approach to Earth at 3:28 p.m. PST. br>
The trajectory of asteroid 2005 YU55 is well understood. At the point of closest approach, it will be no closer than 201,700 miles (324,600 kilometers) as measured from the center of Earth, or about 0.85 times the distance from the moon to Earth. The gravitational influence of the asteroid will have no detectable effect on Earth, including tides and tectonic plates. Although the asteroid is in an orbit that regularly brings it to the vicinity of Earth, Venus and Mars, the 2011 encounter with Earth is the closest it has come for at least the last 200 years.

NASA detects, tracks and characterizes asteroids and comets passing close to Earth using both ground- and space-based telescopes. The Near-Earth Object Observations Program at the Jet Propulsion Laboratory (JPL) in Pasadena, California, commonly called "Spaceguard," discovers these objects, characterizes some of them, and plots their orbits to determine if any could be potentially hazardous to our planet. JPL manages the Near-Earth Object Program Office for NASA's Science Mission Directorate in Washington.

The new radar images are online at.