Northrop Grumman is working with NASA's Goddard Space Flight Center in Greenbelt, Maryland, and leads the industry team that designs and develops the Webb Telescope's optics, sunshield and spacecraft.The spacecraft structure, or bus, is made of carbon fiber composites and houses the spacecraft's propulsion, electrical power and communications. The bus must withstand a force equivalent to 45 tons while supporting the observatory during launch.

While in orbit the spacecraft structure will provide pointing and structural stability for the telescope down to one arcsecond. The structure also provides dynamic isolation and attenuation of vibration sources down to two milliarcseconds. This level of image stabilization is equivalent to shining a laser beam from Los Angeles to New York City, with less than 1.5 inches of motion. 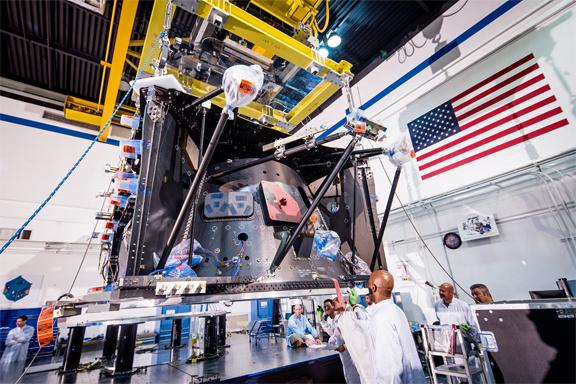 Northrop Grumman completes manufacturing and assembly of the spacecraft structure, or bus, for NASA's James Webb Space Telescope. The bus houses the spacecraft's propulsion, electrical power and communications, and it will help take the Webb Telescope 1 million miles from Earth.

The spacecraft structure integrates the system's optical telescope, sunshield, and instrument electronics and mounts the whole observatory to the Ariane 5 rocket—tasked with launching the Webb Telescope to its destination in space. To launch such a large observatory out to the L2 orbit 1 million miles away, the structure must also be very light-weight so its mass efficiency allows it to carry 64 times its own weight.

The James Webb Space Telescope is the world's next-generation space observatory and successor to the Hubble Space Telescope. The most powerful space telescope ever built, the Webb Telescope will observe the most distant objects in the universe, provide images of the first galaxies formed and see unexplored planets around distant stars. The Webb Telescope is a joint project of NASA, the European Space Agency and the Canadian Space Agency.