The ESA's HERA Planetary Defense Mission is Being Lead by GMV

GMV is leading an international consortium that has been entrusted with designing the analysis of the HERA mission and developing the Guidance, Navigation and Control (GNC) System — the HERA mission is run by the European Space Agency (ESA) and led by OHB-System AG.

Based on the heritage of the Asteroid Impact Mission (AIM) project, HERA aims to be the first interplanetary mission that visits a binary asteroid system, Didymos. This system is composed of a main asteroid (Didymain) and another asteroid that orbits around it (Didymoon). The mission’s main objective is to develop planetary defense technologies. To this end, NASA will send a first spaceship called DART, which will crash into the secondary asteroid Didymoon in order to study how an asteroid could be deflected if it were on a collision course with Earth. 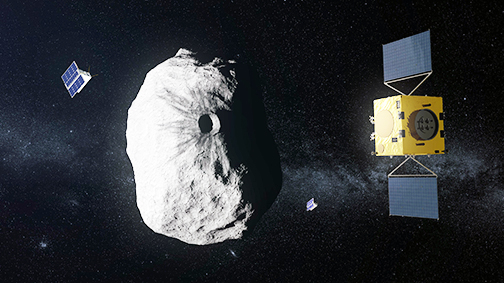 Artistic rendition of the HERA mission.

HERA’s role will be to characterize the asteroids system after the impact and obtain data of incalculable value that will make it possible to develop strategies to handle an eventual impact on Earth. This mission would place Europe once again as the vanguard of planetary exploration, science and technology, repeating Rosetta’s great success.

However, planetary defense is not the only purpose of the mission — scientific development and the research of the origins of the Solar System is another of the main pillars of the HERA mission. Asteroids, small moons, and comets are dangerous objects that wander throughout the Solar System and they are also, possibl,y the most interesting objects that can be visited. All of these celestial bodies are replicas of the primitive Solar System, as they were formed in the early stages of its development and have remained unchanged, which means that there is an immense amount of scientific information to be gathered.

Asteroid proximity operation and navigation are extremely demanding tasks. The small size and mass of these bodies, as well as their irregular shape and the unknown environment of deep space, make it difficult to safely control spaceships moving around one of these bodies. For this purpose, GMV is developing a highly innovative autonomous GNC system to provide this additional safety, thereby guaranteeing the mission’s success.

The tests to certify the level of technological preparation of GMV’s autonomous GNC system will be carried out using a camera designed to work in space. The hardware-in-the-loop simulation tests will be developed in GMV’s optical laboratory and in its platform-art@ robotic facilities.

This consortium is composed of four companies in the GMV group (Spain, Romania, Poland and Portugal), OHB-SWE and Spinworks. Within GMV alone, the HERA team is made up of 20 professionals who for 12 months will be entrusted with developing the technology required to handle the spaceship.

Mariella Graziano, Executive Director of Space Systems and Robotics at GMV, noted that it is of fundamental importance that the space sector emphasizes asteroid missions, both in order to be able to react to possible impacts on Earth and to strengthen the scientific knowledge of the universe and develop innovative technologies for planetary protection.