Lockheed Martin Gets GEO-2 To The Bus 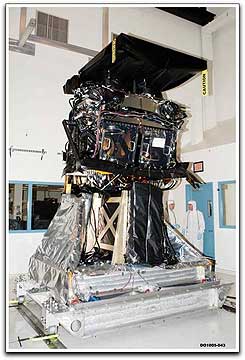 The payload installation closely followed successful completion of spacecraft bus integration and safe-to-mate tests that included the first power-on of the spacecraft. SBIRS will provide early warning of ballistic missile launches and support other missions simultaneously, including missile defense, technical intelligence and battlespace awareness. The GEO-2 bus is the structural foundation of the satellite and includes an integrated propulsion system as well as other critical subsystems for communications, attitude control, thermal control, command and data handling. The GEO-2 payload features a scanning sensor that will provide for short revisit times over its full field of view and a staring sensor that can be tasked for dedicated stare operations over smaller areas. The successful GEO-2 payload and bus integration allows the SBIRS team to begin system level environmental and acceptance testing in preparation for launch in 2011.