[Satnews] Thales Alenia Space announces the company has signed a contract with the European Space Agency (ESA) to build the Copernicus Sentinel-1C and 1D environmental monitoring satellites, as part of Europe's Copernicus program.

Thales Alenia Space Italy was once again named prime contractor for these new satellites, as for Sentinel-1A and 1B. It is responsible for the design, development and integration of Copernicus the Sentinel-1C and 1D satellites, which will feature a C-band synthetic aperture radar (SAR), as well as advanced data management and transmission systems and onboard computer. Thales Alenia Space will supply the transmission/reception (T/R) modules and the front-end electronics, the heart of the C-band SAR antenna, which will be manufactured by Airbus Defence and Space to Thales Alenia Space's specifications. 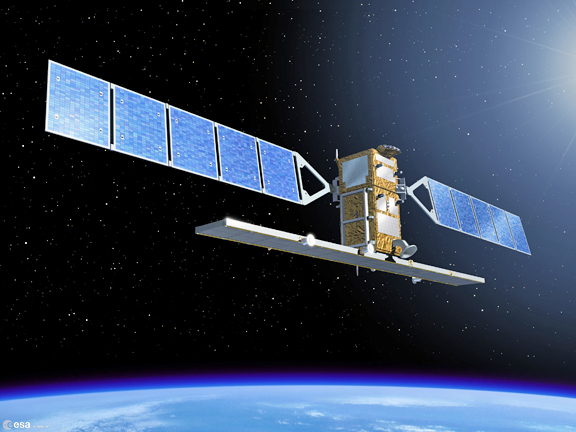 The Copernicus Sentinel-1C and D satellites will be built on the Prima platform developed by Thales Alenia Space on behalf of the Italian space agency. They will each weigh about 2,300 kilograms at launch, and will be positioned at an altitude of 700 kilometers, offering a ground resolution of 5 to 25 meters, depending on the operating mode selected.

The main goals of the Sentinel-1 mission are: mapping of urban areas and environmental impacts, monitoring of risks caused by movements of the Earth’s surface, surveillance of the marine environment, maritime security, monitoring of sea ice, forests and climate change, fast response to emergency services.

ESA's Sentinel program include six families of satellites, each equipped with instruments dedicated to their specific remote sensing mission. Sentinel-1 will ensure continuity with data gathered by the ERS and Envisat radar satellites. The Sentinel-1A satellite, launched in April 2014, is now fully operational, while its twin, Sentinel-1B, scheduled for launch in the spring of 2016, is undergoing final testing at the Thales Alenia Space plant in Cannes.