Aireon's MOA With Airservices Australia To Bring ADS-B Into Airplay... 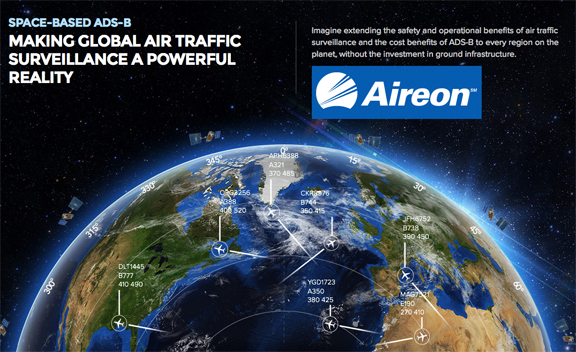 Leading ANSP Airservices Australia manages air traffic control, aviation rescue and air navigation services for over 20 million square nautical miles (51.7 million square kilometers) of airspace. This includes commanding air traffic operations for over 90 million passengers on more than four million flights every year. Airservices has been operationally separating aircraft with ADS-B for a decade and became the first ANSP to commission a continent-wide ADS-B system. It now has more than 60 percent of Australia-based aircraft IFR flights ADS-B equipped. That number is slated to increase due to Australia’s safety regulator, the Civil Aviation Safety Authority (CASA), mandating that all IFR aircraft flying in Australia’s airspace be ADS-B equipped by February 2017.

According to Greg Hood, Executive General Manager Air Traffic Control, Airservices Australia, “We are interested in examining how space-based ADS-B could potentially be used in the future and will work with Aireon to determine the potential safety benefits of the technology and efficiency benefits it may offer for our customers, especially for oceanic services and in cross-boundary coordination with our neighbors. There is potential for space-based ADS-B to offer value not only to Airservices, but for all of our customer airlines, airports and search and rescue teams and we are keen to explore that in further detail.”

“Airservices operates, maintains and controls over 11 percent of the world’s airspace, much of which is oceanic,” said Cyriel Kronenburg, vice president, Aireon. “Airservices has always been a leader in investing in best-in-class systems and an early adopter of technology to not only improve efficiency and reduce separation, but also increase safety. Airservices and Aireon will collaborate to examine the value of space-based ADS-B. Also, by gaining a better understanding of how Aireon’s system will improve operations, they will also be able to consider the savings that the service may provide.”