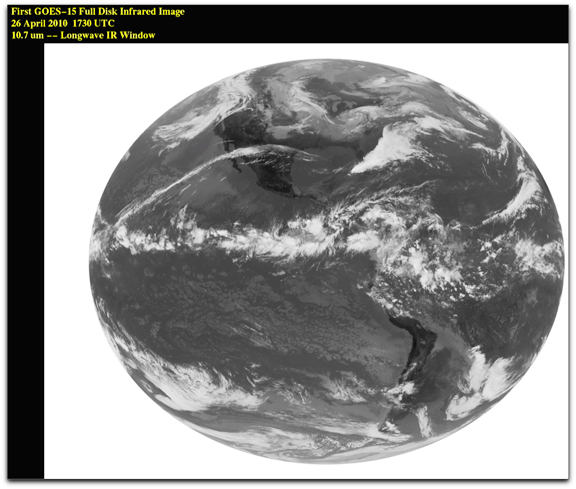 GOES-15 – took its first full-disk infrared image of the Earth on April 26 at 17:30 UTC (1:30 p.m. EDT). Clouds associated with the low pressure areas over the Ohio Valley and southern Minnesota and the cold front coming into the Pacific Northwest are visible. Credit: NOAA/NASA /SSEC

Infrared imagery is critical for accurate weather forecasts, revealing a range of information — from the swirling motion of clouds and sea-surface temperatures, to moisture profiles of the atmosphere and the movement of smoke plumes from wildfires. GOES-15 was launched March 4, 2010, from Cape Canaveral, Florida. After approximately five more months of tests, NASA will officially “hand over” the satellite to NOAA, which will place it in orbital storage mode. GOES-15 will be ready for activation if any of NOAA’s other four geostationary spacecraft experiences trouble. Each of the five Imager spectral bands are shown. There is one visible band and four infrared bands (shortwave window, water vapor, longwave window and a CO2 sensitive band). NOAA understands and predicts changes in the Earth’s environment, from the depths of the ocean, to the surface of the sun, and conserves and manages our coastal and marine resources.
Topical Tags :
Agencies
Regulatory/Government
Consumer Applications
Satellite Operator
Service Provider
Regional Tags :
North America