The Eutelsat + AMOS By Spacecom Agreement Is Good News For Africa 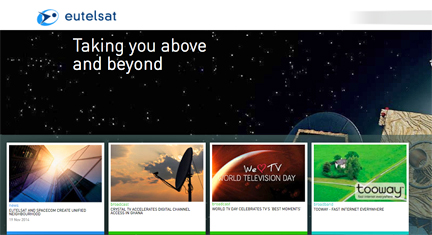 [SatNews] Eutelsat Communications (NYSE Euronext: Paris) and Spacecom (TASE:SCC) have signed a partnership agreement that will drive expansion of digital entertainment services at one of Africa’s fastest-growing video neighborhoods.

The two companies have established a framework for cross-commercialization of Ku-band capacity connected to the high-power African service areas of Eutelsat’s EUTELSAT 16A satellite at 16 degrees East and Spacecom’s AMOS-5 satellite at 17 degrees East. The combined channel line-up of both satellites already comprises more than 100 free-to-air (FTA) African and international channels that can be received by standard 80cm dishes in a vast footprint covering over 30 million TV homes located notably in Francophone Africa and extending to Ghana and Nigeria.

Leveraging their respective knowledge of Africa’s fast-growing broadcast markets, the two operators will pool their commercial efforts to ignite further growth at the 16-17 degrees East position, which is already the leading DTH and FTA video neighbourhood in West Africa. In addition to improving the quality and effectiveness of broadcasting services, this unique agreement raises the bar for service continuity for broadcasters and will deliver viewers a larger channel line-up from one virtual orbital position. Launched in 2011 and equipped with identical Ku-band African footprints, the EUTELSAT 16A and AMOS-5 satellites host FTA channels as well as payTV, DTT and FTA platforms for media companies who are increasingly turning to satellites as the fastest and most competitive route to digital content delivery.

Commenting on the partnership, Rodney Benn, Eutelsat’s Regional Vice President for Africa, said, “This agreement between Eutelsat and Spacecom shows how neighboring operators can combine their strengths  to offer Africa’s broadcast community the full benefits of their expertise.”

Amir Carmeli, SVP Sales West Africa & France of Spacecom, said, "Africa is a tremendously dynamic market for digital broadcasting. Our agreement with Eutelsat enriches viewers' experiences throughout the continent. By creating a joint effort that aggregates content and improves the commercial reach of advertisers, we are optimizing the broadcast environment. The availability of diverse and quality broadcasts from Africa and abroad, extends the limits of African entertainment possibilities and develops social and educational values.”