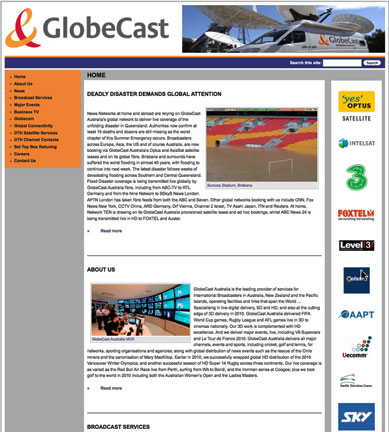 As television audiences struggle to comprehend an ongoing deadly flooding disaster that has gripped different parts of Australia this summer, GlobeCast Australia is continuing to provide live transmissions for at least 20 major news broadcasters. Commercial Director Andrew Nealon says Australia’s leaders have repeatedly remarked on how live television coverage is assisting those amidst the crisis, while ensuring the rest of the world is kept informed. “Despite an already heavily dedicated live television schedule this January, we of course therefore ensured sufficient personnel and facilities were available to facilitate as much live coverage of these devastating floods as possible,” Mr. Nealon said.

Broadcasters across Europe, Asia, the U.S. and, of course Australia, are booking via GlobeCast Australia’s Optus and AsiaSat satellite leases and on its global fibre, to cover the mounting death toll from the worst flooding in the Australian state of Queensland in almost 40 years. Mr. Nealon said, “For example, flood disaster coverage from ABC-TV is being delivered live to RTL Germany and coverage from the Nine Network to BSkyB News London. APTN London has taken fibre feeds from both the ABC and Seven Network. Other global networks booking with us include CNN, Fox News New York, CCTV China, ARD and ZDF Germany, Orf Vienna Turkey, Channel 2 Israel, TV Asahi Japan, ITN and Reuters. For domestic broadcasts, Network TEN is drawing on its GlobeCast Australia provisioned satellite lease and supplementing its extensive coverage with ad hoc bookings; whilst ABC News 24 is being transmitted live in HD to FOXTEL and Austar on GlobeCast Australia’s Optus D3 owned and operated capacity. SKY News Australia has also deployed its satellite vehicle to the flood zone and is taking regular live satellite slots with GlobeCast Australia. And the 9 Network is booking our Optus D2 space as well.”

Live coverage continues around the clock with the support of GlobeCast Australia's dedicated 24/7 Bookings and Master Control teams. These same teams have also been delivering record hours of global sporting event coverage from Australia to live television audiences this January. Across all capital cities, there will be more than 35 days of live tennis television coverage delivered nationally – to FOX Sports and the Seven Network - and internationally. The Australian Open in Melbourne will be delivered globally in HD for the first time. The Tennis commitment follows daily delivery of marquee sporting events this Summer including Ashes cricket coverage in HD for BskyB across December and January, and ongoing cricket broadcasts. Almost daily there’s also coverage from all corners of the country of harness and thoroughbred racing for SKY Racing. Other key events include the Tour Down Under Cycling for SBS, BskyB and globally this January 2011; and live reality television such as Granada’s “Ich Bin Ein Star” (“I’m a Celebrity”) live from Australia for German audiences.