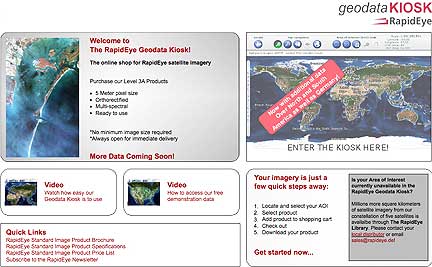 RapidEye's GeoDataKiosk homepage link...
[SatNews] RapidEye has, over a period of only three months, imaged 95 percent of the contiguous United States.

Almost 80 percent of this imagery was captured by the RapidEye satellites with less than ten percent cloud cover. The campaign, which began on May 1st and was completed on July 31st, produced an abundance of imagery with many areas covered multiple times. Not only the United States was covered; 97 percent of Mexico was collected and almost 60 percent of Canada. Many areas were imaged more than once over this three month span which totaled 17 million square kilometers of North America. All of this imagery is currently available for purchase in the RapidEye Library.