[SatNews] After its 10-year journey, Rosetta is the first spacecraft to rendezvous with a comet... 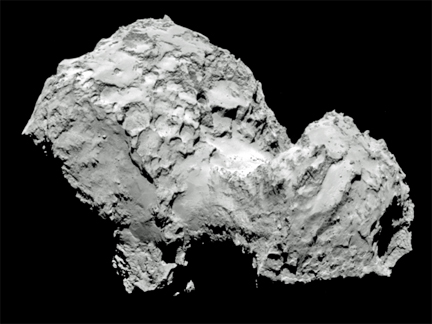 The view of Comet 67P/Churyumov–Gerasimenko from Rosetta on August 3rd.

The European Space Agency's ambitious "comet-chaser" Rosetta space probe, which is one of the numerous scientific spacecraft that received an "initial push" with Arianespace's launch services,- continued its mission to explore the Universe, meeting up with with comet 67P/Churyumov-Gerasimenko on Wednesday.

Launched on an Ariane 5G+ version of Arianespace's workhorse heavy-lift launcher in March 2004 from the Spaceport in French Guiana, Rosetta was successfully placed on an Earth-escape trajectory that began a 10-year journey through the Solar System toward its comet destination. Designed to chase, orbit and land a probe on a comet, Rosetta includes an orbiter and the "Philae" landing probe, which is scheduled for deployment to the comet's surface this November. Following Rosetta's arrival, the spacecraft will study the comet and its environment for nearly two years -including flying alongside 67P/Churyumov-Gerasimenko as it enters the inner Solar System. 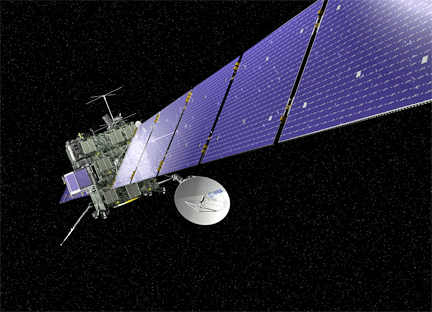 Artistic rendition of the ESA's Rosetta spacecraft.
In addition to Rosetta, scientific spacecraft lofted by Arianespace and its Starsem affiliate on Ariane and Soyuz series vehicles have traveled to Mars and Venus, investigated the Earth's magnetic environment, analyzed radiation created after the Big Bang and set out to map more than one billion stars. Other scientific missions carried out by Arianespace and Starsem-launched spacecraft also include exploration of: plasma processes in the magnetosphere and ionosphere, the Universe's infrared wavelengths, celestial X-ray sources, stellar vibrations, extrasolar telluric planets (such planets are composed of silicate rocks or metals), the chemical composition of celestial bodies and the Universe's molecular chemistry.

“Our first clear views of the comet have given us plenty to think about,” said ESA’s Rosetta Project Scientist Matt Taylor on the Rosetta activities webpage. “Is this double-lobed structure built from two separate comets that came together in the Solar System’s history, or is it one comet that has eroded dramatically and asymmetrically over time? Rosetta, by design, is in the best place to study one of these unique objects.”

“Over the next few months, in addition to characterizing the comet nucleus and setting the bar for the rest of the mission, we will begin final preparations for another space history first: landing on a comet,” said Taylor. “After landing, Rosetta will continue to accompany the comet until its closest approach to the Sun in August 2015 and beyond, watching its behavior from close quarters to give us a unique insight and realtime experience of how a comet works as it hurtles around the Sun.”

The ESA's Rosetta mission blog may be accessed at http://blogs.esa.int/rosetta/.