By 'George',  Germany Will Buy Up to Three Spy Satellites


Last year, German news outlets reported that the foreign intelligence agency would receive one espionage satellite. However, according to recent reports, the total may reach three. 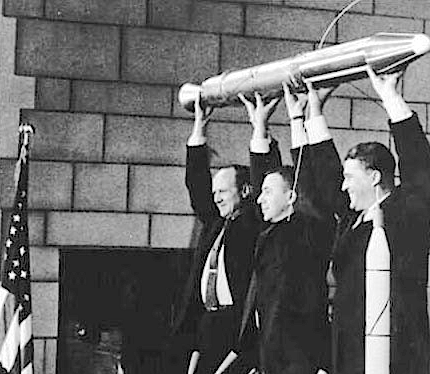 Germany will spend 400 million euros ($465 million) on the construction of “up to three new spy satellites” for its intelligence service, RND news group reported, citing security sources. Construction is set to begin this month.

The budget committee of the country’s parliament (Bundestag) has already approved financing of the costly project, according to Die Welt.  Last year, German news outlets reported that the foreign intelligence agency would receive one espionage satellite. However, according to recent reports, the total may reach three.

The new satellites are to be used by Germany’s foreign intelligence agency, the Federal Intelligence Service (BND), “to provide quick and autonomous information to be able to make independent and up-to-date assessments of the situation,” Die Welt said, citing a paper from the chancellery. It is no longer enough to purchase imagery on the commercial market or to request it from international partners, the document reportedly added. The BND currently receives its data from the German Army, which operates its own network of satellites.

At a meeting last month, top brass from German foreign intelligence, and domestic and military spy agencies said international cooperation and information-sharing is ever more critical as threats become more global. BND President Bruno Kahl recently said that German intelligence agencies need to be on the cutting edge of technology, “otherwise the digital revolution will only benefit those we should be protecting our country from.”

His department landed in hot water following allegations that it spied on high-profile US targets, including the White House, the State Department, and the military for almost a decade. Even US-based international organizations such as the IMF and HRW were on the watchlist, Spiegel reported in June.

Another article by the magazine claimed that the BND snooped on the offices of the International Criminal Police Organization (Interpol) all over the world for many years. The BND spied not only on Interpol headquarters in Lyon, France, but also on a number of the organization’s liaison offices located in Austria, Denmark, Belgium, Greece, Spain, Italy, and the US, Der Spiegel said back in April.

In October 2016, the German parliament approved a controversial bill granting the intelligence agencies wider powers, including spying on EU facilities. The law was criticized as “unconstitutional” at the time. In February, Der Spiegel reported that the intelligence service had snooped on Western news media outlets and international news agencies, including the BBC and Reuters, since 1999.