...arrived in French Guiana, joining a completed launcher that is poised for liftoff tomorrow. Delivered this month was hardware for the fourth, fifth and sixth Soyuz flights to be performed from the Spaceport—designated VS04, VS05 and VS06 in Arianespace’s launcher family numbering system. This includes the third stage and payload fairing for Arianespace’s VS04 flight, scheduled in November; along with the first, second and third stages, Fregat upper stages and payload fairings for the VS05 and VS06 Soyuz missions, planned for 2013.

The hardware arrived aboard the MN Colibri, which is one of two sea-going roll-on/roll-off ships used for the transport of launcher components from Europe and Russia to French Guiana. With this latest delivery, the Spaceport now is “home” to four Soyuz vehicles, beginning with the completed VS03 launcher that is ready for an afternoon departure tomorrow with a pair of Galileo In-Orbit Validation (IOV) navigation satellites.

As the countdown continues for VS03, preparations are moving into full swing for late November’s VS04 flight, to carry France’s Pléiades 2 very high resolution optical observation satellite. Build-up of the basic three-stage Soyuz for VS04 will be initiated next week in the Spaceport’s MIK assembly building, while this mission’s Fregat upper stage has completed its checkout in the MIK facility and is now ready for transfer to the S3B clean room for fueling during the coming week.

The MN Colibri completes another trans-Atlantic voyage (left photo), arriving at Pariacabo Port with elements for three Soyuz launchers. At right, a convoy enters the Spaceport with some of the Soyuz components unloaded from the MN Colibri.
Photo courtesy of Arianespace. 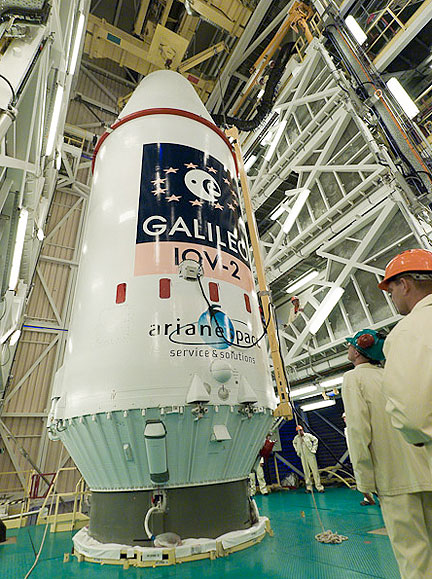 This image, taken in an upper level of the ELS launch site’s mobile service gantry, shows the payload fairing with its two Galileo satellites atop the Soyuz launcher.
Photo courtesy of Arianespace.
Additionally, Arianespace’s third Soyuz launch from the Spaceport in French Guiana has been authorized for liftoff tomorrow...

...on a mission to orbit two additional spacecraft for Europe’s Galileo navigation satellite constellation. This “go” approval was given today after the regular pre-launch review for Arianespace missions, confirming the readiness of its medium-lift Soyuz, the ELS launch site and associated infrastructure at the Spaceport, along with the network of flight-following tracking stations.

The mission is designated VS03 in Arianespace’s flight numbering system, and will be performed from the purpose-built ELS launch facility for Soyuz, located in the Spaceport’s northern sector near the city of Sinnamary. All is set for an October 12th liftoff at 3:15:01 p.m. local time in French Guiana on a mission lasting just under 3 hrs., 45 min., which includes the powered flight of Soyuz’ three stages and two propulsive burns of the Fregat upper stage.

The payload is a second pair of Galileo In-Orbit Validation (IOV) satellites, weighing 700kg. each, which will join the initial two IOV spacecraft orbited on Arianespace’s historic VS01 flight on October 21, 2011—which marked Soyuz’ introduction at the Spaceport. Today’s readiness review followed a full-scale rehearsal, held yesterday, that simulated the launch and involved the same teams and communication links to be used during the actual mission. Both Galileo IOV spacecraft—which are integrated atop Soyuz in the 4.1-meter-diameter ST payload fairing—have now been activated for their useful operational lifetimes of approximately 12 years.

The four satellites launched on Arianespace’s VS03 and VS01 missions will form an operational mini-constellation that enables a validation of the Galileo system. All four spacecraft were built by a consortium led by the Astrium division of EADS, with assembly and testing performed by Thales Alenia Space. Galileo is a European initiative, with this navigation system being developed in a collaborative effort of the European Union and the European Space Agency.