It's no secret that 'Secret' status is supposed to remain a secret.

Now more than sixty vessels in the French Navy are now equipped with the ‘Réseau Intranet de la Force Aéronavale étape 2’ (RIFAN 2) system, ranging from aircraft carriers and front-line frigates to support ships, patrol craft based overseas, and submarines to ensure all ships at sea can now establish secure broadband links with each other and with the onshore command center. 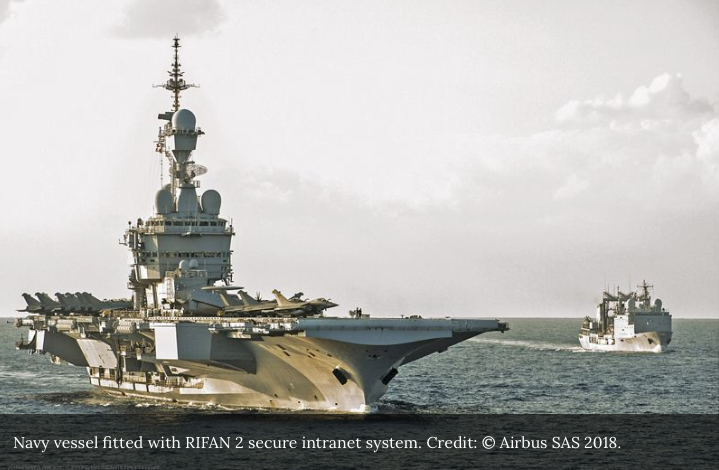 The purpose of the program is to equip the French Navy’s surface ships and submarines with a truly secure intranet system. It is designed to transmit data with various classification levels, ranging from ‘unprotected’ to ‘secret’ and ‘NATO secret’.

This network transmits data produced by the various applications, both to coordinate operations and for daily and logistical management of life on board, as well as to exchange data between information systems of theater chiefs of staff on board a vessel for the duration of an operation.

The RIFAN 2 program contract, worth around 160 million euros, was awarded to an industrial group headed by Airbus as the prime contractor and comprising the Naval Group and Rohde & Schwarz as co-contractors.

Whether it’s a ship sailing alone, a carrier group, or an amphibious group on operations, the various vessels are equipped to meet their respective connectivity requirements. The system is capable of combining several communication streams in order to optimize the use of the transmission capacity available at sea, which is, by nature, limited. It therefore uses satellite connections, such as Comcept or Syracuse, as well as radio communication resources. Existing radio systems have been refurbished, and a new UHF network has been deployed, which now allows all-IP (Internet Protocol) voice and data exchanges between ships, with a range of several tens of kilometers.

RIFAN 2 also provides overall network management and cybersecurity incident monitoring capability. This monitoring can take place both from an onshore management and control center, or locally on board the ships, thus providing the crews with a degree of independence, so that they can make the best use of the network according to the operational situation.

The network will become increasingly dense with installation planned for the Barracuda submarines under construction, for medium-size frigates (FTI program), which are to be the French Navy’s future front-line vessels, as well as for the future replenishment tankers (FLOTLOG program).

The RIFAN 2 system is regularly adapted and upgraded, whether in terms of its central architecture or the integration of new means of satellite broadband communications. Similarly, the cybersecurity incident monitoring and detection system will also be upgraded.