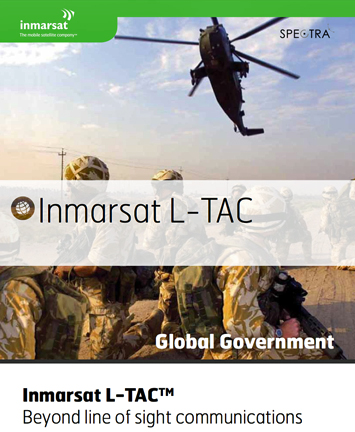 This new service will significantly extend the range and capabilities of VHF radios used by the emergency services and enable full interoperability between civilian and defence forces radios—crucial during major incidents or civil emergencies. Introduced last year, Inmarsat’s L-TAC service is already in use by defence forces around the world, providing a low cost, Tactical UHF Satellite (TACSAT) capability, which greatly extends the range of UHF tactical radios by linking them via Inmarsat’s global satellite constellation into a seamless, secure network. Using the unique Spectra Slingshot adapter kit, created exclusively for use over the Inmarsat satellite network, defence departments and now civil government customers can rapidly convert existing radios to access the L-TAC network through the simple addition of a small converter and antenna.

Previously, the benefits of military grade communications technology, such as L-TAC, have not been available to civilian customers.  To support the crucial work of the emergency services and other civilian government departments, Inmarsat has introduced a VHF Simplex versions of the Slingshot adapter kit. This extends the L-TAC service into a new frequency band, one that is utilised by an extensive number of end-user radios worldwide. There are now two Slingshot VHF variants available; one operating at 58 to 88MHz, which is a military band, and the new civil version, operating at 144 to 174MHz, which is a commercial band. The Slingshot products and their interface with the Inmarsat L-TAC network have been designed so that VHF variants and the original UHF Slingshot can all be used within a single L-TAC network, thereby allowing full interoperability between the radios.

For regular VHF users, L-TAC offers a fast to deploy and cost effective capability for extending terrestrial coverage, either in remote terrains where there is no local VHF repeater or where natural or criminal action has destroyed the repeater. Border protection, combating terrorism or drug cartels are typical operational applications for such technology. Both UHF and VHF variants of Slingshot are available in vehicular, maritime and manpack versions and all can be combined into a single L-TAC network.

“In a disaster scenario, our new civilian L-TAC service would enable normally disparate teams such as military, police and civil agencies to work more closely together,” said Andy Start, President, Inmarsat Global Government.  “While they may all be using different radio types and frequency bands, with L-TAC they can interconnect with each other without the current need for a retransmission facility.”

The Spectra Group's infosite may be visited at http://www.spectra-group.co.uk/