[SatNews] In support of Baltic Operations 2015, June 5-20, a team of Airmen from the 1st Combat Communications Squadron deployed to Powidz Air Base, and were charged with the responsibility of maintaining all communication requirements for the Air Force at the installation.

Baltops is a multinational maritime exercise in Poland, Sweden, Germany and throughout the Baltic Sea, including participation from 14 NATO and three partner nations. Baltops is designed to enhance flexibility and interoperability, as well as demonstrate the resolve of allied and partner forces to defend the Baltic region. 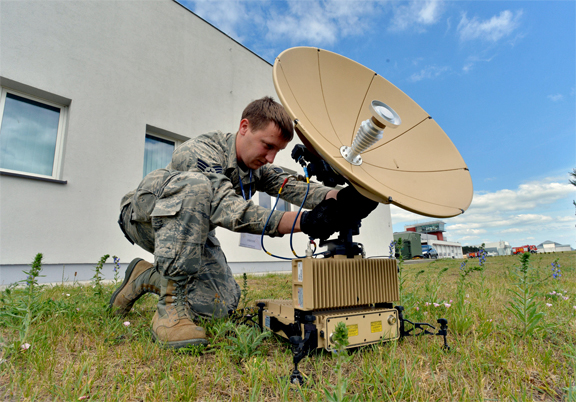 Senior Airman Brendan Kennedy, a 1st Combat Communications Squadron satellite communications technician, calibrates a L3 Panther during Baltic Operations 2015, June 10, 2015, at Powidz Air Base, Poland. During rotational deployments such as Baltops, each Airman on the communications team is selected due to their specific skills sets.

The three-person team; Staff Sgt. Dean Gage, the 1st CBCS cyber systems supervisor, Senior Airman Ian Philips, a 1st CBCS tactical network operations technician and Senior Airman Brendan Kennedy, a 1st CBCS satellite communications technician, are the sole points of contact for Baltops communications. According to Kennedy, upon arrival at a deployment location, the three Airmen worked around-the-clock to ensure communications were setup within 24 hours, so all requirements for operations were met and running efficiently before the deployment teams arrived.

"You need communications or nothing will get done," Kennedy said. "We arrive early so that once boots hit the ground, they are good to go. If we didn't, everything would go to a standstill."

During rotational deployments such as Baltops, each Airman on the communications team is selected due to their specific skills sets.

A large portion of the communication specialists' setup requires the team to establish a link with their home station at Ramstein Air Base, Germany. Additionally, the team enables all network capabilities, programs, computers, phones and radio connections. Along with setting up the initial communications, the team is responsible for resolving any communications issues the 100th, 916th and 507th Air Refueling Wings may have during their 15-day deployment.

"Without us, the missions will go on," Gage said. "But the deployers will have overall limited capabilities. We set up everything from phones to laptops, Wi-Fi and email."