GOCE Heading To Plesetsk For Launch

GOCE, the first of a series of Earth Explorer satellites to be launched into orbit, has taken off aboard an Antonov-124 cargo aircraft for its flight to the Arkhangelsk Airport in Russia, en route to Russia's Plesetsk Cosmodrome, about 800 km north of Moscow. Preparations for the transport of the spacecraft began on July 23rd when it was packed in its own nitrogen-pressurised container inside the GOCE clean room at ESA's European Space Research and Technology Centre (ESTEC) in Noordwijk, the Netherlands. The container was transported by truck to Schiphol Airport in Amsterdam, where it was loaded into the Antonov aircraft. 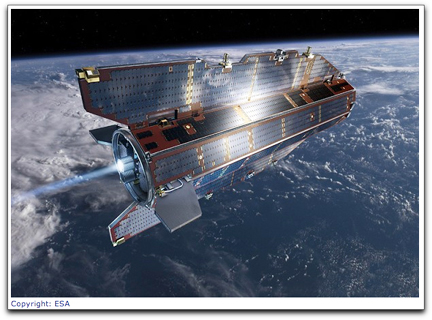 The spacecraft is not travelling alone — 11 other containers, carrying a host of vital support gear, including electrical and mechanical ground support equipment, are accompanying it. Four ESA and five Thales Alenia Space (Italy) GOCE Launch Campaign team members are on the plane to monitor the spacecraft and perform all the operations needed until it reaches its final destination. The flight will land in Arkhangelsk and undergo custom clearance. Once cleared, the Spacecraft Transport Container and the other containers will be transported by trucks to the local train station where they will be loaded onto goods wagons. The containers will travel by a special train with escort personnel for the remainder of their 200-km journey southward to Plesetsk Cosmodrome, where they are due to arrive on July 31st. Upon arrival, the spacecraft and other containers will be unloaded into the launch base and, after the satellite is unpacked, a final check will be carried out before being mounted onto its Rockot launch vehicle 13 days prior to launch. GOCE is scheduled for launch on September 10th.
Topical Tags :
New Products
Launch
Regional Tags :
Europe
Global