[SatNews] Marsha Sills of The Advocate reports that the countdown starts on Tuesday for the launch of the small, cube satellite that has been designed and built by a team of University of Louisiana at Lafayette students. 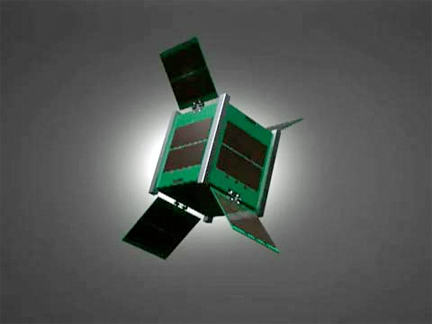 Artistic illustration of the University
of Louisiana's CAPE-2 CubeSat.
The Cajun Advanced Picosatellite Experiment, the team’s small communications satellite, is scheduled to launch as payload for the Minotaur I rocket between 6:30 and 8:15 p.m. Tuesday from NASA’s Wallops Flight Facility in Virginia. A group of team members traveled Monday to Virginia and will view the rocket’s launch on Wallops Island as other team members await the chance to communicate with the satellite about 40 minutes after its launch.

“It’s really exhilarating and surreal for us right now,” said Rizwan Merchant, a team member and computer science major, while en route to Virginia. “We’ve been working on it for years and now we’re at the last stage of the game.”

The team calls its satellite CAPE-2. The device, which measures 10 cubic centimeters and weighs 2.2 pounds, is capable of converting text to speech, Tweeting, sending emails, repeating verbal messages transmitted via radio, transferring files and collecting data from buoys in the Gulf of Mexico. The team’s satellite is one of 11 selected for NASA’s ELaNA-4 mission, which stands for Educational Launch of Nanosatellites, a NASA program designed to promote satellite technology and research.

The university started its CAPE program nearly 10 years ago, and its first small satellite—CAPE-1—launched in 2007.

“This is an outstanding achievement for them. We are just one of the few (universities) in the nation who have launched a satellite already and this is our second launch,” said George Thomas, head of UL Lafayette’s electrical engineering department.

On Tuesday night, about 40 minutes after the launch, team members in Lafayette will attempt to activate the satellite’s communication systems, said Louis Courville, a UL Lafayette electrical engineering student and CAPE-2 project manager.

“We’ll try to record the first audio coming off it and get it to report basic health data about its systems: how charged up its batteries are, if there’s irregular temperatures,” Courville said.

“We have some handheld devices that will communicate with the satellite for students to use to get them excited about space,” Thomas said.

Team members will watch the launch Tuesday from their lab on campus. The public can watch the launch online and the link for live streaming video from Wallops is http://www.ustream.tv/channel/nasa-tv-wallops.