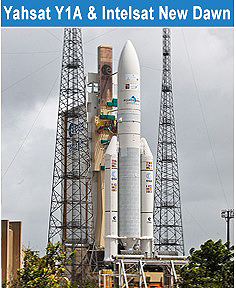 [SatNews] It's a "no-go" for the newest Intelsat satellite...

Intelsat S.A. has announced that the launch of the Intelsat New Dawn spacecraft aboard an Ariane 5 rocket, initially scheduled for launch on March 30, 2011, was scrubbed after the launch sequence was shut down automatically. The spacecraft is secure. Arianespace is going to review the data and make another launch attempt at a later date.

In the last seconds of Ariane Flight VA201's launch countdown, as the Vulcain cryogenic main stage engine was being ignited, the checkout process detected an anomaly on the launcher, interrupting the final countdown. The Ariane 5 launcher and payload immediately switched to a safe mode. Data analysis is underway to determine the cause of the anomaly, and in parallel, the launcher will be transferred to the Final Assembly Building, where it will be returned to a flight-ready condition. Arianespace will set a new launch date as soon as possible.