This will be India’s largest space cooperation with any country, officials said. Additional information revealed that the launch of these maritime surveillance satellites will focus on the Indian Ocean, a region that has been witnessing increasing Chinese presence. France will also share its expertise with the Indian Space Research Organisation (ISRO) on inter-planetary missions to Mars and Venus, the Indian space agency’s two major missions, Gall said, who stated talks regarding this constellation of new satellites for maritime awareness will take time.

The purpose of the constellation is monitoring sea traffic management, a CNES official said, adding that it would take less than five years to launch the satellites. In March of this year, India and France unveiled a joint vision for space, resolving to strengthen cooperation between ISRO and CNES. In a joint statement, ISRO and CNES stated they would work together for design and development of joint products and techniques, including those involving Automatic Identification System (AIS), to monitor and protect assets in land and sea. In particular, both sides will pursue the study of a constellation of satellites for maritime surveillance,. 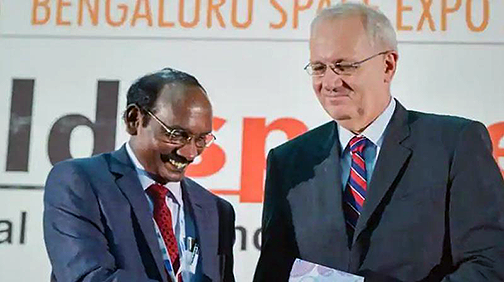 Photo is courtesy of PTI.

The two nations are also working on the Trishna satellite for land Infrared monitoring and the Oceansat3-Argos mission. Discussing collaboration for the mission to Venus and Mars and France’s expertise on the matter, Mathieu Weiss, the managing director of CNES’ India liaison office, explained that the eyes and scientific heart of Curiosity Rover (NASA) on Mars were developed by CNES. France and Russia have jointly worked for the Venus mission in the past. In both the inter-planetary missions, the French scientific community is strong and among best in the world.