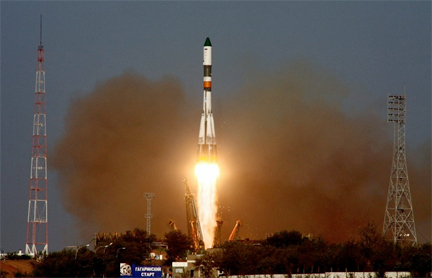 The Soyuz-2 launch of the Progress M-24M.

Russia’s Progress-family space freighters have been serving the ISS for decades and are used not only to bring cargo and food to the station but to adjust the orbit of the ISS as well. The station’s orbit is adjusted regularly to ensure safe docking of the freighters and manned spacecraft as well as to avoid possible collision with space debris. After fulfilling their missions, Progress space freighters are usually deorbited and burnt in the atmosphere on their way to the Earth. Remains of the spacecraft, which did not burn, are usually buried in the remote area of the Pacific Ocean.

The non-navigation area at the issue is also referred to as the “spaceship cemetery” and is located not far from the Christmas Island. This is a designated area, where numerous spacecraft, including the defunct Soviet space station Mir, were sunk. The current crew working at the ISS comprises Russia’s Maxim Surayev, NASA’s Gregory Wiseman and European Space Agency’s astronaut Alexander Gerst.