Hiltron recently completed a combined Ku- and C-band HMAM Ka-band antenna mount system for Thales. In addition, Hiltron has developed an automatic system to switch between Ku- and C-band feeds in a project for the Airbus Group. Standard feeds for both bands are moved into the focus of the antenna. Depending on which feed is in the focus, the antenna receives signals in Ku- or C- band. This system is universal and can be used for all kind of feeds. 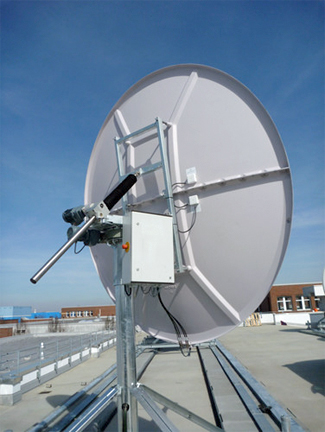 Five Hiltron HMAM motorized high-precision rotatable VSAT mount antennas are being supplied to SES Astra for integration into a Passive Correlation Ranging (PaCoRa) project in the USA. PaCoRa is a joint development between SES Astra and the Fraunhofer research institute. The project involves the analysis, design, implementation and validation of a fully passive and highly accurate ranger for geostationary satellites. The goals are to develop a system that provides highly accurate orbit predictions of geostationary satellites, allowing dense co-location with up to eight satellites in one orbital box.

Jan Molter, Managing Director, Hiltron, said, "HMAM is one of our most successful innovations to date. New versions developed since the introduction of the original model in 2010 include the HMAM-Ka, which is the world's first, triple-axis, motorized 2.4 meter, receive-only, Ka-band antenna, with switchable linear and circular polarization. Another HMAM variant is the HMAM-IOT, which incorporates inclined-orbit tracking. This enables the antenna to follow the position of older satellites that have been allowed to drift further from their nominal target position than during their premium service life."