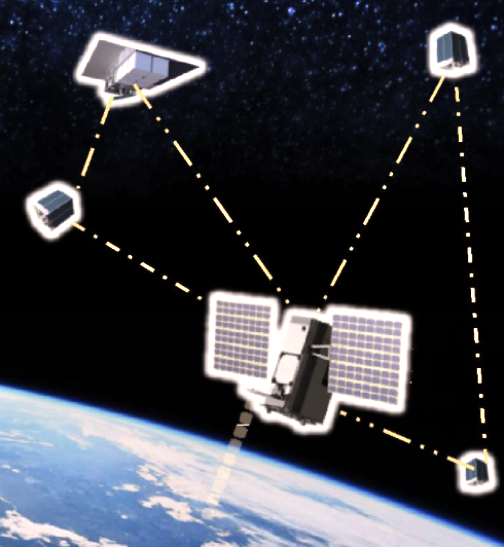 Satellites connected via SWIFT-LINQ can share resources and data, empowering groups of low-cost small satellites to perform missions that traditionally would have required large, very expensive satellites.  TUI delivered the SWIFT-LINQ app to a confidential customer, loaded on three S-band SWIFT radios that will fly on a trio of small satellites scheduled for launch in 2020.

The SWIFT-LINQ mesh networking functionality supports communications resiliency for satellites. With SWIFT-LINQ, each satellite becomes a node in the network, with a unique IP address. Satellites that are out of range of one another can use other satellites to bridge together and continue communicating and sharing data with one another.

Additionally, the mesh network adapts to changing conditions, such as when satellites come in and out of range, automatically rerouting traffic to ensure timely data delivery. Unlike traditional satellite communications that require a direct link with a ground antenna to communicate, SWIFT-LINQ can provide redundant communications paths and act as a data relay to extend ground contact windows.  SWIFT-LINQ uses TCP/IP and UDP/IP protocols to route information from one node to the next, making satellite interconnectivity as easy as connecting a laptop to WIFI. All messages are secured with encryption to ensure only the proper node gets the correct information.

Dr. Rob Hoyt, TUI’s CEO, stated that now that the SWIFT Software Defined Radio is mature and demonstrated on-orbit, the company is building out a family of ‘apps’ that will increase the utility of the platform to satellite operators as well as enable the firm to roll out new services for resilient, secure, and efficient satellite communications. The recently-delivered solution will connect three satellites into a mesh network with data transfer at rates of 48 kbps and work is underway to enable future SWIFT-LINQ systems to network together hundreds of satellites, UAVs, and ground systems.

TUI GM, Seckin Secilmis, added that the company is upgrading the system to even higher speeds and deliver even more capability. The modern smart phone had to start somewhere and these humble beginnings are a very necessary step to allowing the company to understand the interactions between wirelessly connected nodes in space.