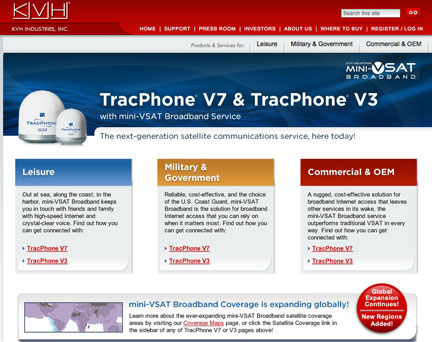 KVH infopage
[SatNews] After an introduction in February of this year, this unit managed to ellicit highly positive comments from the maritime SATCOM industry.

The ultra-compact TracPhone® V3 from KVH Industries, Inc., (Nasdaq:KVHI) was it the world's smallest maritime VSAT system and also changed the equation as to how mariners thought about paying for their broadband service at sea, thanks to its simple metered airtime plan — $0.49 per minute for all voice calls worldwide and $0.99 per megabyte at the fastest available speeds via the mini-VSAT Broadband(SM) network. Now, KVH has announced this new, streamlined metered pricing program is available to all new mini-VSAT Broadband subscribers, whether they are using a TracPhone V3 or V7, with easy, inexpensive packages designed to support a wide range of monthly data needs. At a fraction of the cost of competing Inmarsat services, these rate plans are the simplest and most convenient choice available for maritime satellite communications. In addition to the new metered rate plans, KVH also offers mariners its popular fixed-price and seasonal airtime options, which means that there is a mini-VSAT Broadband airtime rate plan to meet every mariner's unique needs.

The mini-VSAT Broadband network was designed from the ground up to be the first next-generation maritime satellite communications solution. The global spread spectrum satellite network, built with ViaSat's patented ArcLight® technology, offers more affordable airtime, voice service and Internet access as fast as 512 Kbps (ship to shore) and 2 Mbps (shore to ship). KVH's compact family of mini-VSAT Broadband-compatible TracPhone antennas are more affordable and faster and easier to install than competing solutions. More than 1,000 TracPhone V7 systems were shipped in the first three years after the product's introduction, making the mini-VSAT Broadband network the fastest growing maritime VSAT solution. KVH's mini-VSAT Broadband customers include the U.S. Coast Guard and leading commercial shipping companies such as Nordic Tankers, Mowinckel, and Vroon.