The Chinese Tiangong-2 Space Laboratory is Going for a Swim 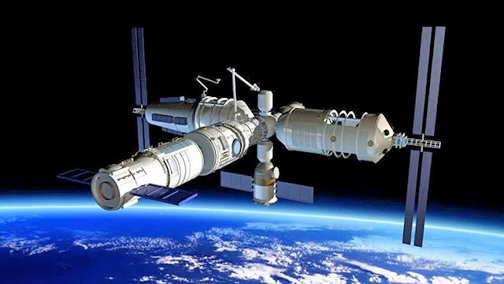 The final hours for China’s Tiangong-2 space lab are at hand, as the 8-ton piece of hardware will fall to Earth, or rather sea, in a controlled, de-orbit manuever; however, unlike with the Tiangong-2's predecessor, it isn’t a mystery where this particular piece of space debris is going to fall, this according to a report at the TechCrunch infosite, reported by author and photographer Devin Coldewey.

Tiangong-2 is a small space station that was put into orbit in 2016 to test a number of China’s orbital technologies; it was originally planned to stay up there for two years, but as many a well-engineered piece of space kit has done, it greatly exceeded its expected lifespan and has been operational for more than a thousand days now.

Chinese Taikonauts have visited the station to perform experiments, test tools, orbital refueling, and all that sort of thing. But it’s not nearly as well equipped as the International Space Station, nor as spacious — and that’s saying something — so they only stayed a month, and even that must have been pretty grueling.

The time has come, however, for Tiangong-2 to be deorbited and, naturally, destroyed in the process. The China National Space Administration indicated that the 18-meter-wide station and solar panels will mostly burn up during reentry, but that a small amount of debris may fall “in a safe area in the South Pacific,” specifying a rather large area that does technically include quite a bit of New Zealand. (160-190°W long by 30-45°S lat)

They did not specify when exactly it would be coming down, except that it would be during July 19 Beijing time. It should produce a visible streak but not anything you’ll see if you aren’t looking for it.

To read the entire article, please access this direct infolink...