This isn't your usual makeover of a home or a kitchen with the before and then 'reveal' of the after with the new paint and floors that have been done in a typical home. No, this is in fact an upgrade and modernization of the Darmstadt headquarters of EUMETSAT's, the European Organisation for the Exploitation of Meteorological Satellites. The refurbished Geostationary Mission Control Centre has been updated and improved to reveal a more flexible, energy-efficient and secure workplace that is also more dynamic and productive for spacecraft and ground segment controllers. 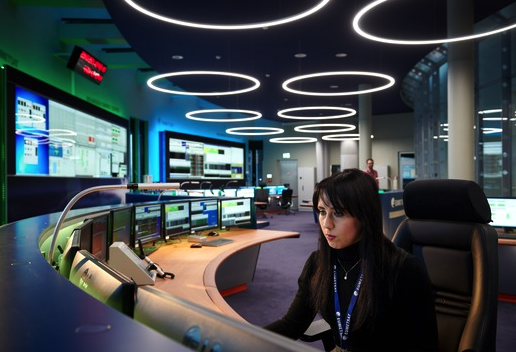 EUMETSAT Head of Flight Operations, Mike Williams, said the new virtualized architecture of the control center offers a degree of flexibility not possible with old technology. Any screen in the new control center can be used to monitor any ground segment facility, such as, for example, the back-up control center at Fucino, Italy, if required. Previously, each screen was fixed to each ground segment facility and controllers would move to the screen they needed. Now, the screen can be moved to them.

EUMETSAT Head of Strategy, Communication and International Relations Paul Counet said the new control center was a crucial part of a significant upgrade being undertaken by EUMETSAT to prepare for major new programs. He added that the Geostationary Mission Control center is now equipped to control the current fleet of four Meteosat Second Generation (MSG) satellites, as well as the upcoming Meteosat Third Generation (MTG), which will start to be deployed from 2021. More satellites will be controlled from the same space. The Mission Control center upgrade is part of a wider upgrading of EUMETSAT’s ground segment, as they prepare for the deployment of the next generation of their geostationary and Low Earth Orbit satellites and to operate more Sentinel satellites on behalf of the European Commission in the future.

Counet continued saying that the new EUMETSAT Meteosat and Metop satellites, with payloads containing new and next-generation instruments that will produce a vastly increased amount of data for users, will herald a new era of operational meteorology and climate monitoring. And that the National Meteorological and Hydrological Services in EUMETSAT’s 30 Member States are preparing now to use this data in nowcasting and numerical weather prediction a complex computer modeling of the weather.

All weather forecasts throughout Europe depend heavily on the data from EUMETSAT’s satellites.

Counet said work has begun on an upgrade of EUMETSAT’s Low Earth Orbit Mission Control center, with work expected to be completed in the first quarter of 2020.