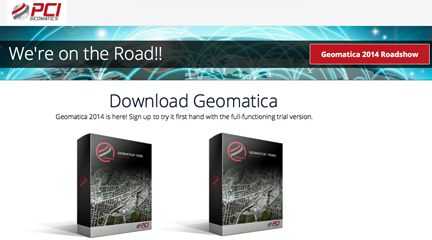 [SatNews] PCI Geomatics, a developer of remote sensing and photogrammetric software and systems, has announced a series of online and live events focused on the Geomatica 2014 software release.

The Geomatica 2014 Roadshow will provide an opportunity for customers, partners, and interested end-users to engage with PCI Geomatics staff as they provide information on the new capabilities of Geomatica 2014. A full schedule and information about the events can be found at http://GetGeomatica.com/.

New features in Geomatica 2014 include: Live DEM Editing, which lets users see and edit DTM errors on an automatically updated, live ortho-preview; Smart GeoFill, which facilitates the retouching of ortho-mosaics while maintaining full geo-referencing, channel combinations and bit-depth; and Python scripting, which allows customized code that combines image processing with other tasks to streamline data management applications, generate intelligent business products, or customize output for a variety of GIS applications.