The delivery of PolaRx5 multi-constellation GNSS reference receivers and antenna systems to the U.S. Geological Survey (USGS) has been completed by Septentrio.

The monitoring systems will be deployed through the Volcano Hazards Program (VHP) for volcano monitoring stations in Alaska and at various international locations through the Volcano Disaster Assistance Program (VDAP)—a cooperative effort between the USGS and the U.S. Agency for International Development's Office of U.S. Foreign Disaster Assistance. 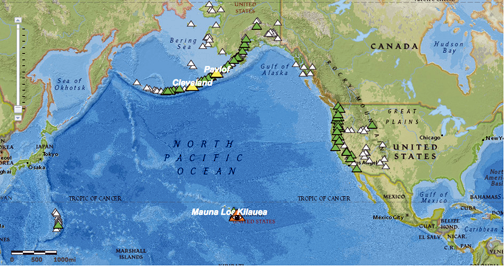 US Volcanoes and Current Activity Alerts.

The PolaRx5 receivers take full advantage of the new 5.1.0 firmware, which includes support for onboard PPP and dynamic response tuned for seismic applications. The PolaRx5 tracks all visible signals from Galileo, GPS, GLONASS, BeiDou, IRNSS and QZSS constellations. It provides industry-leading measurement quality and robust interference mitigation thanks to Septentrio’s patented AIM+ technology. The PolaRx5 supports these advanced features and more with a power consumption that is scalable from less than 2.0 watts.

According to Neil Vancans, the Vice President of Septentrio Americas, USGS and their partners will be among the first to exploit the PolaRx5’s seismic monitoring features. The PolaRx5 is Septentrio’s most complete GNSS receiver to date and provides the ideal upgrade for modernizing any continuously-operating reference station (CORS) network.