As a result of the test, the companies confirmed it is possible to broadcast in 4K Ultra-High Definition (UHD) format through Gazprom Space Systems' Yamal satellite network using NEC's solution for encoding and transfer of the 4K UHD video signal.

During the tests, the TV signal was encoded by NEC's VC-8150 encoder, broadcast via the satellite of Gazprom Space Systems, and decoded by NEC's VD-8100 decoder with a time lag of no more than three seconds. To compress the digital video signal, NEC used the high efficiency video coding (HEVC) standard, which doubled the efficiency of data compression in comparison with MPEG-4 technology, and increased the image quality by a factor of four in comparison with the HD high definition television format. 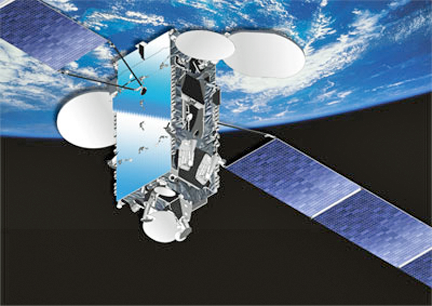 Artistic rendition of the Yamal-401 satellite.

Akihiro Sakurai, Managing Director of CJSC NEC Neva Communications Systems, noted the readiness of NEC to expand cooperation with Russian partners in the field of digital television as NEC has, for the first time, tested video signal transfer in the 4K UHD format in Russia that could open new prospects and opportunities in the field of digital television with Gazprom Space Systems.

Alexander Illiasov, First Deputy Chief Engineer at Gazprom Space Systems, stated that the joint tests with NEC of the 4K UHD standard has confirmed the readiness of the Yamal satellite network for the introduction of new services.