Rosetta's Impactful Retirement To The Surface Of Comet 67P/C-G


The decision to end the Rosetta mission on September 30th ultimately comes as a result of the spacecraft’s ever-increasing distance from the Sun.

Comet 67P/C-G, and therefore Rosetta, is currently heading out toward the orbit of Jupiter, resulting in significantly reduced solar power with which to operate the craft and its instruments. In addition, by early October, the teams would be faced with a month-long solar conjunction—when the Sun lies between the Earth and Rosetta and the comet. This would result in significantly reduced communication capabilities (including downlinking science data) for around a month. Combined with an ageing spacecraft and payload that have endured the harsh environment of space for over 12 years—not least two years close to a dusty comet—this means that Rosetta is reaching the end of its natural life and so September 30th was considered the optimum date to conclude the mission. 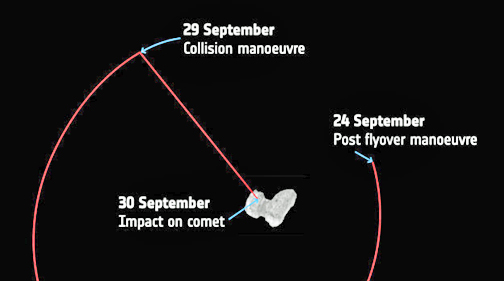 Artistic rendition of Rosetta’s last week at the comet. Image is courtesy of ESA.

Rosetta will descend to the surface of Comet 67P/C-G in a controlled impact. During this descent, unique scientific observations will be possible, including very high-resolution images and sensitive measurements of gas and dust, at distances closer than Rosetta has ever been before.

Unlike in June 2011, when Rosetta was put into a 31-month hibernation for the most distant part of its journey, this time it is riding alongside the comet. Comet 67P/Churyumov-Gerasimenko’s maximum distance from the Sun (over 850 million km) is more than Rosetta has ever journeyed before. The result is that there is not enough power at its most distant point to guarantee that Rosetta’s heaters would be able to keep it warm enough to survive. Instead of risking a much longer hibernation that is unlikely to be survivable, and after consultation with Rosetta’s science team in 2014, it was decided that Rosetta would follow its lander Philae down onto the comet. 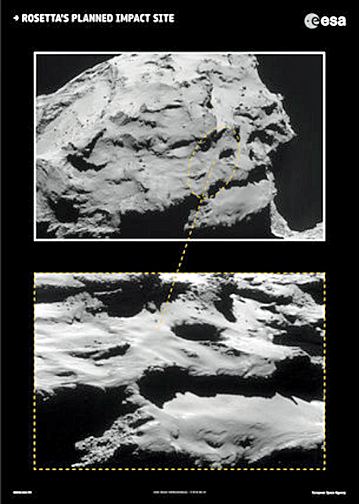 Rosetta will end its mission with a controlled impact in the Ma’at region, on the small lobe of Comet 67P/Churyumov-Gerasimenko. The region was chosen because it is scientifically very exciting: it is home to a number of active pits, measuring over 100 m across and 50 m deep, to which a number of dust jets emerging from the comet have been traced back. The pit walls also exhibit lumpy structures called ‘goosebumps,’ with sizes of a few meters, which could be the signatures of early cometesimals that merged together to create the comet in the early phases of Solar System formation. Therefore, scientists will obtain close-up images, along with information on the dust, gas, and plasma environment very close to such pits, which will help them understand their connection to the comet’s observed activity, and as well to learn more about how they relate to the formation and evolution of the comet. Thus a trajectory has been planned for Rosetta that will see it fly over a region of pits, with a touchdown point a smooth area between two of them.

There are a number of uncertainties associated with Rosetta’s descent, including the precise timing and duration of the final maneuver burns, the distance from the comet at that time, the non-uniform gravity of the comet, and the effects on the spacecraft of outflowing material from the comet. A large set of trajectories has been calculated taking into account plausible variations in each of these parameters, each resulting in a different touchdown point. Present best estimates predict that Rosetta will impact somewhere within a 700 x 500 meter ellipse centered on the nominal target point.

In order for Rosetta to take the best possible images during the descent, the spacecraft and targeted touchdown point need to be in sunlight, in order to generate power and be illuminated, respectively. The interiors of the pits on Comet 67P/C-G are dark when not directly in sunlight. Plus, in order to ensure that the final data are sent back to scientists, the spacecraft needs to be in line-of-sight visibility until touchdown. So, while the pits will be targeted for imaging during the descent, the actual touchdown is planned to take place adjacent to one of them. However, given the uncertainty in the precise touchdown point described above, there is at least the possibility of ending up in a pit. 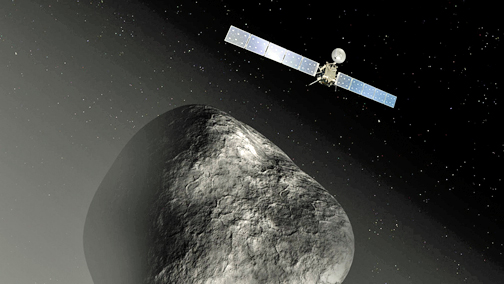 Artistic rendition of the Rosetta orbiter. Image is courtesy of ESA.

Rosetta’s planned touchdown site is on the small comet lobe, but on the opposite side from where Philae has been located at Abydos. Due to a combination of orbital dynamics and illumination reasons, the current trajectory plan does not see Rosetta pass over Philae during the descent.

On September 24th, Rosetta departed its current close, flyover orbits and transfered into the start of a 16 x 23 km orbit that will be used to prepare and line up for the final descent. During the evening of September 29th (20:50 UTC), a maneuver will place Rosetta on a collision course with Comet 67P/C-G, initiating the descent from an altitude of 19 km above the surface. The spacecraft will fall freely towards the comet, without further maneuvers, collecting scientific data during the descent.

Impact is expected to occur on September 30th at 10:40 UTC at the comet, with an estimated error of ± 20 minutes. As the signal travel time between Comet 67P/C-G and Earth on that day will be 40 minutes, confirmation of impact is expected at our mission control, ESOC, at 11:20 UTC / 13:20 CEST, again with an estimated error of ± 20 minutes. It is anticipated that this uncertainty will be reduced as the end of the mission approaches. All times are presently nominal and subject to final definition of the descent trajectory, as well as possible circumstances beyond our control.

The planning for the scientific investigations to be made during the descent are still on-going, and involve a complex trade-off between the amount of power available from Rosetta’s solar panels, the amount required to run each instrument, and the downlink data rate possible on the day. At present, it is expected that the final sequence of observations will include images and measurements of the gas, dust, and plasma properties.

For obvious reasons, all scientific data collected during the descent must be relayed back to Earth in quasi real-time, and will not accumulate in the on-board mass memory storage for subsequent downlink as is usually the case. Data transmission will end as soon as the spacecraft impacts the comet. It is expected that some of these data, most notably some of the images, will be made available to the public as soon as possible on the day, allowing for some nominal processing time. Once the science instrument planning has been completed, we intend to update this section with more details.

As soon as Rosetta hits the surface, the craft's main systems will be turned off, including the attitude and control systems, as well as the main transmitter, the latter in order to meet regulations aimed at avoiding interference on deep space network communications channels. The software that will enable this ‘passivation’ will be uploaded to the spacecraft a week prior to the planned end of mission, and it will be activated around the time of the collision course maneuver, approximately ten hours prior to impact. No automated re-activation will be possible after the systems have shutdown on impact. In any case, as soon as Rosetta hits the surface, its high-gain antenna will very likely no longer be pointing towards Earth, making any potential communications impossible.

When Rosetta woke up from hibernation on January 20. 2014, the craft's renewed contact with Earth was signaled by the appearance of a spike in a spectrum analyzer display at ESOC at the expected frequency. Conversely, when Rosetta reaches the surface of the comet on 30 September and the main transmitter is turned off, this spike should disappear from a similar display, confirming to mission controllers and the world that impact has occurred.

One of the key features of the trajectory design is to minimize the spacecraft's relative velocity at impact. The current scenario predicts that the impact velocity will be around 90 cm/s, around walking pace. It is worth keeping in mind that Rosetta was not designed as a lander, and some of its appendages, including the 32 meter wide solar panels, will be damaged by the impact. This energy dissipation will likely ensure that the escape velocity will not be exceeded during any bounce, thus preventing Rosetta from returning to orbit after impact with Comet 67P/C-G. If Rosetta does bounce back into space, such would not be realized as the craft's main systems, including the main transmitter, will be turned off at the moment of impact. 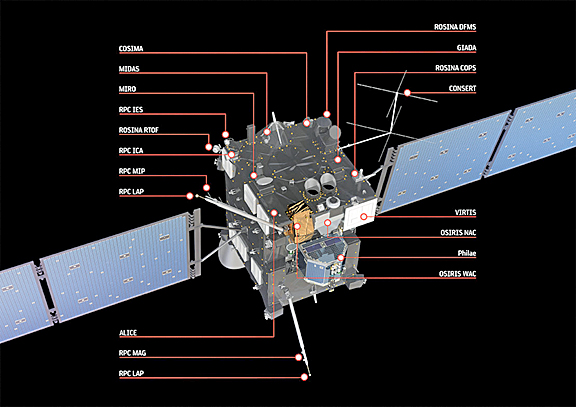 At present, the spacecraft is in a close flyover phase, approaching to within roughly two kilometers of the comet surface at closest approach. This makes for a complex interaction between the spacecraft, the non-uniform gravity of the comet, and the outgassing of materials from the surface. In flight dynamics terms, operating in this phase is much more challenging than during the Philae landing. To make this final phase possible, certain flight rules have had to be suspended, including one that forbids maneuvers that might bring the spacecraft onto a collision course with the comet if the maneuver was interrupted during its execution. Also, operating very close to the comet means that there is always the chance of an outburst adversely affecting the spacecraft. Thus there is definitely a possibility of losing the spacecraft before September 30th.

The extreme circumstances of the final flyover phase are placing high demands on Rosetta. For example, the spacecraft reaction wheels will be operating at much higher speeds than normal because the spacecraft slew rates will be higher during this phase. Higher torques on the wheels increase the chance of a malfunction.

Should Rosetta enter any other safe mode, the operations team will aim to recover the spacecraft and evaluate the impact on the trajectory and short-term operational timeline. However, at some stage, as September 30th draws closer, there will be a point of no return. For example, there may not be enough time to recover the spacecraft such that the science instruments can be pointed towards the comet before the final impact. Furthermore, if there is a safe mode after the passivation patch has been activated (approximately ten hours before impact), then the spacecraft will automatically switch off before impact and will not be recoverable. As the one-way signal travel time on September 30th will be 40 minutes, there is no chance of real-time communication and rapid emergency reaction to such issues.