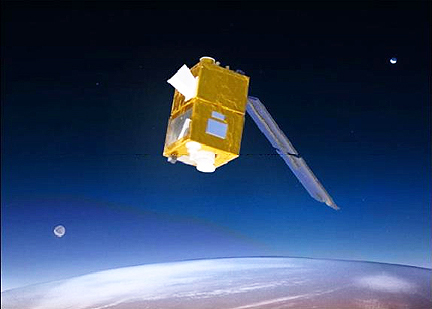 Cartosat-2B
Cartosat-2B — the remote-sensing satellite placed into orbit by the Polar Satellite Launch Vehicle (PSLV-C15) on Monday — will become operational in a week. The rocket also placed four other satellites as well into orbit at an altitude of 637 km.

“The health of the satellite is good. Everything has been checked out. It will become operational in a week's time,” said P.S. Veeraraghavan, Director, Vikram Sarabhai Space Centre, Thiruvananthapuram. The images taken by Cartosat-2B's camera will be available soon after the satellite becomes operational. The satellite's solar panels were deployed soon after it flew out of the fourth stage of the vehicle, Mr. Veeraraghavan said. He added rocket specialists from other countries had commended the Indian Space Research Organisation (ISRO) for the PSLV's repeated success with multiple satellite launches. This is the eighth time that a PSLV has put several satellites in orbit. On April 28, 2008, the PSLV-C9 put 10 satellites in orbit, one after another, creating a record. The satellites were Cartosat-2A, Indian Mini Satellite-1, and eight nano satellites from abroad. The PSLV-C15's flawless mission came as “a morale booster” to the ISRO after the Geosynchronous Satellite Launch Vehicle's (GSLV-D3) failure on April 15 this year, said Veeraraghavan. (Source: The Hindu)
Topical Tags :
Agencies
Regulatory/Government
Launch
Satellite Operator
Service Provider
Regional Tags :
Asia/Asia Pacific