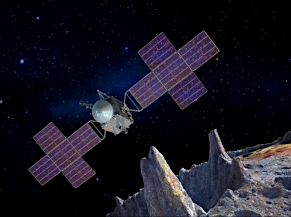 After completing an extensive NASA design review, humanity is one-step closer to exploring an all-metal world called 16 Psyche. As previously announced, Maxar is working together with NASA’s Jet Propulsion Laboratory  (JPL) and Arizona State University’s School of Earth and Space Exploration (ASU) in the first mission to explore what is believed to be an asteroid made of metal rather than rock or ice. The mission is expected to offer insight into how our planet formed.

The Project Preliminary Design Review took place over a five-day period at NASA’s Jet Propulsion Laboratory and demonstrated that Maxar’s Psyche spacecraft design meets mission requirements. NASA missions undergo multiple rigorous technical and programmatic reviews as they proceed through the phases of development prior to launch. The Project PDR is the third of six major NASA mission milestones, culminating in the final design and fabrication of the spacecraft, and launch in 2022.

Psyche will travel to the asteroid using Maxar’s next-generation solar electric propulsion system, the highly efficient SPT-140. First launched in 2018 on a large communications satellite, the system is successfully operating on three spacecraft currently in orbit. The SPT-140 system equipped on the Psyche spacecraft is customized for its mission, which will require it to operate in the significantly diminished sunlight found in the main asteroid belt, three times further away from the Sun than the Earth.

Maxar has collaborated with NASA for decades, and in addition to our work on Psyche, we’re also developing next-generation electric propulsion technologies for the agency’s future missions. This includes concepts for a module that will provide power and control for NASA’s lunar Gateway, a human crew-tended spaceport in lunar orbit that will function as an access point to the Moon and deep space, and concepts for a high efficiency 6kW electric propulsion engine, which would provide variable voltage for increased mission efficiency, power and flexibility.

We’re incredibly proud of the progress that we’ve made together with NASA JPL and ASU on the Psyche mission, which will help to build a better world here on Earth by enabling humanity to look back in time to understand how our planet formed. And as NASA and other pioneers strike out to explore new frontiers, Maxar stands ready to leverage our commercially proven space systems and advanced solutions to help customers solve their most complex, mission-critical challenges with confidence.